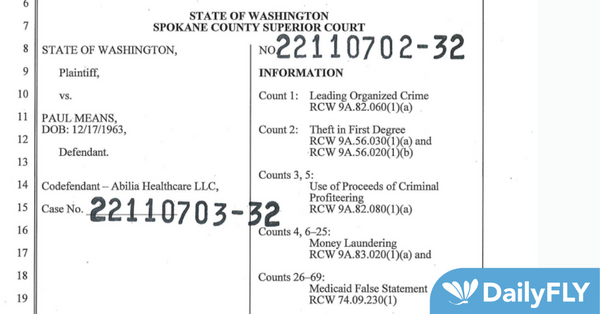 Means is charged with:

Abilia Healthcare is charged with:

Due to the high degree of sophistication, lengthy period of time, and scale of the monetary loss, the office also notified the court it will be seeking a sentence above the standard range, if Means and his business are ultimately convicted.

The charging documents allege that between 2017 and November 2020, Means and Abilia Healthcare billed Washington Medicaid for more than $5 million in services he falsely claimed he and his employees had rendered. The documents allege nearly every claim filed during this period contained at least one fraudulent assertion, including instances of fabricating diagnoses for patients and billing for psychotherapy that never occurred.

The statement of probable cause is excerpted below. The full document is available here.

The Rules of Professional Conduct govern what a prosecutor in a criminal case may say publicly before trial. As the prosecutor in this criminal matter, the Attorney General’s Office and its representatives are prohibited from making public statements beyond the narrow scope allowed by the Rules of Professional Conduct. The office will make every effort to be transparent with the public, while upholding its responsibilities as a criminal prosecutor.

The Attorney General’s Medicaid Fraud Control Division is responsible for the investigation and prosecution of health care provider fraud committed against the state’s Medicaid program. The Washington State Medicaid Fraud Control Division receives 75% of its funding from the U.S. Department of Health and Human Services under a grant award totaling $8,606,556 for federal fiscal year FY 2023. The remaining 25%, totaling $2,868,852 for FY 2023, is funded by Washington state Medicaid fraud recoveries.

CERTIFICATION FOR DETERMINATION OF PROBABLE CAUSE

DECLARATION
I, Scott C. Tollackson, Supervising Special Agent, declare that I have personal knowledge of the matters set forth below and that I am competent to testify to the matters stated herein.  On the basis of the following, I submit there is probable cause that Abilia Healthcare LLC and Paul Means have committed the following crimes in Spokane County, Washington: Leading Organized Crime, RCW 9A.82.060; Theft in the First Degree, RCW 9A.56.030(1)(a) and 9A.56.020(1)(a)(b); Medicaid False Statement, RCW 74.09.230(1)­­; Use of Proceeds of Criminal Profiteering, RCW 9A.82.080(1)(a); Money Laundering, RCW 9A.83.020(1)(a); and Witness Tampering, RCW 9A.72.120(1)(c).  This case contains the following information on which the Certification for Determination of Probable Cause is made.

AFFIANT’S EXPERIENCE
I am a Supervising Special Agent with the Medicaid Fraud Control Division (MFCD) of the Office of the Attorney General for Washington State and am familiar with the investigation conducted in this case.  The MFCD is a Division within the Attorney General’s Office.  Its specialized function is to investigate and prosecute provider fraud committed against the Medicaid program and to review, investigate, and prosecute complaints of abuse or neglect of patients in residential health care facilities.  See RCW 74.67.010.  Effective July 1, 2011, the Washington State Health Care Authority (HCA) administers Medicaid, a medical care program authorized under RCW 74.09.

I have been a Medicaid fraud investigator with the Washington State Attorney General’s office since September 2018.  Prior to working for the Attorney General’s Office, I was a fraud investigator for an insurance company for about 8 years and a claims supervisor managing the medical payments unit.  I also have about 10 years of law enforcement experience as a patrol deputy and undercover narcotics detective for Kootenai County Sheriff in Idaho and as a detention deputy in Kittitas County, Washington.  I have completed the Washington State Criminal Justice Training Academy Detention Deputy graduating first in my class in May 1993 as well as the reserve officers’ academy in April 1993.  I have also completed the Idaho Police Officers Standard Training Academy in 1996 as a certified peace officer.  I have also obtained certification as an EMT in Washington State (expired).  I have a BA in law and justice with a minor in economics from Central Washington University.

STATEMENT OF PROBABLE CAUSE
I submit based upon the following that there is probable cause to believe that Paul Means and Abilia Healthcare LLC have committed the above listed crimes.  This declaration is based on information I have gained from my own investigation, personal observations, training and experience, as well as information related to me by other detectives, investigators, and police officers through oral and written reports.  I have reviewed, and am familiar with, the investigative file in this matter.

SUMMARY OF INVESTIGATION
In late 2019, the MFCD received a referral from the Washington State Health Care Authority (“HCA”) regarding Means and Abilia Healthcare possibly billing Medicaid for services not rendered and using improper billing codes.  The referral set out a review of billing practices and an audit showing there was no documentation to substantiate most of the billing codes submitted by this provider.

Through the course of this investigation, as described in detail herein, I have learned that Paul Means, through his company Abilia Healthcare LLC (“Abilia Healthcare” or “Abilia”), submitted Medicaid billing claims that misrepresented the services provided by Means and his employees.  Means employed ARNPs to provide medical services to clients residing in substance use disorder treatment facilities.  These ARNPs would hold short sessions, usually no more than ten or fifteen minutes, with patients either in person or via telemedicine to address medical and mental health issues and medication management.  The ARNPs would then use a website Means created to enter information about their visits.

Means would submit, or cause to be submitted, Medicaid billing claims that sought payment for more extensive patient evaluation and management (“E&M”) encounters than were actually provided by the ARNPs, and which paid more than accurately-reported claims would have payed (also called “up-coding”).  The billing claims also sought payment for psychotherapy services that were not, in fact, rendered by the ARNPs.

Means fraudulently altered, or caused to be altered, patient medical records specifically indicating the E&M services provided were significantly more extensive than they actually were.  Means also added, or caused to be added, fabricated language to encounter notes and medical documentation to make it look like psychotherapy was provided when it was not.  Means maintained two sets of encounter notes, one on a Google Drive account and one with Office Ally, a company that provides Electronic Health Record (EHR) services.  Initially, the MFCD was only aware of the Office Ally records, but later learned of, and collected, the records from Means’ Google Drive account.

Means sought out and recruited, employed, managed, directed, supervised, and financed individuals in the Philippines to assist him in altering and fabricating patient encounter notes and submitting false Medicaid billing claims.  Means and these individuals used software that would produce auto-generated, randomized language to insert into the encounter notes after the ARNPs had used the website Means created to enter truthful information about their visits.  The ARNPs were generally not able to see their prior encounter notes so they were not aware that Means was altering the notes.  Nor were the ARNPs aware that their services were being up-coded or that Means was billing as if they provided psychotherapy services.  In the few instances where the Abilia providers noticed such notes had additional or inaccurate information, Means told the providers it was an error being corrected by the “back office” or told the ARNP to “stay in your lane.”

This has been an extensive investigation.  The evidence showing the fraudulent nature of the billing claims and encounter notes includes interviews with the Abilia ARNPs, patients, and facility staff at the treatment facilities; review of internal messaging between Means and his back office staff; training videos Means made showing his back office staff how to create and add fabricated language to encounter notes; and forensic software analysis of Means’ website and digital devices.  The MFCD’s understanding of the scheme has evolved over the course of the investigation.  This statement of probable cause sets out the course of the investigation and the steps the MFCD took to develop a full picture of the fraud scheme.

BACKGROUND ON ABILIA HEALTHCARE
Department of Health records indicate that Means, listed owner of Abilia Healthcare, obtained his Nurse Practitioner license on November 25, 2009, and his Nurse Practitioner license for psychiatric/mental health on January 1, 2016.  Each provider who wishes to bill Medicaid for services is required to enter into a Core Provider Agreement with HCA.  See WAC 182-502-0005.  Means executed a Core Provider Agreement with the HCA on June 27, 2013, as the “owner/president” of Abilia Healthcare.  I have obtained and reviewed a copy of the Core Provider Agreement signed by Means in which he agrees to abide by HCA rules and billing instructions and to keep complete and accurate medical and fiscal records.

The Abilia providers and facility staff interviewed have stated that Means stopped actively operating Abilia Healthcare following the execution of warrants by MFCD on November 17, 2020.  A review of Medicaid data shows that Means has not submitted new Medicaid claims since this time.  Abilia Healthcare appears to be inoperative at this point, however annual reports filed with the Washington Secretary of State on January 15, 2021, and January 31, 2022, continue to list Means as the Governor of the company and continue to list the company’s address as 4301 S. Helena Street, Spokane, Washington.  As such, while the company appears to be inoperative, it still exists as an on-going legal entity.