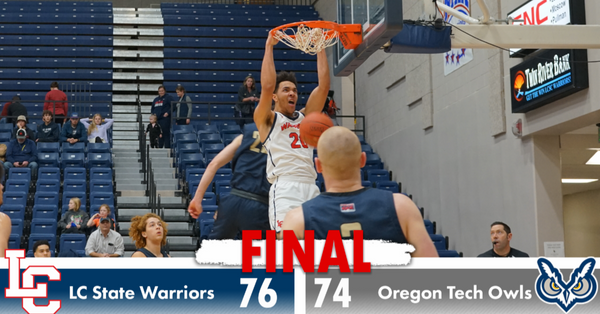 LEWISTON – For the second consecutive game, freshman John Lustig set a career-high to help the Lewis-Clark State Men’s Basketball team snap a four-game losing streak with a 76-74 victory against the Oregon Tech Owls.

The Warriors improved to 7-9 on the season and 4-6 in Cascade Conference play.

“Proud of our guys for their effort and togetherness,” Head Coach Austin Johnson said. “Obviously this was a much-needed win against a tough opponent, but beyond the final score it was encouraging to see our guys compete closer to the identity we are hoping to have here at LC.”

The Warriors started hot as Lustig hit a pair of shots. Silas Bennion turned a steal into an easy layup and Davian Brown hit a 3-pointer. The perfect 4-for-4 start gave Lewis-Clark State an early 9-4 lead in the first 2:23.

Lustig hit baskets on three straight possessions to give the Warriors a 17-10 advantage with 13:18 remaining in the first half. The freshman had 10 points in the first seven minutes of the game but went scoreless the rest of the first half.

Will Abram extended that lead to double-figures when he got behind the defense for a dunk for a 26-15 Warrior advantage.

Oregon Tech cut into the lead late in the first with a 6-0 run to get as close as five before Sam Stockton ended nearly a three-minute Warrior drought and LC took a 34-27 lead into the locker room.

The Owls used a 15-1 run to take a 51-45 lead that included a nearly four-minute scoreless span for the Warriors. Lustig drained a bucket from beyond the arc to end the run.

With Oregon Tech up five, Brown made a layup and Bennion hit two free throws to cut the lead to just one. Brown netted two from the line himself to give LC the lead back 58-57 with 7:42 to play.

Brown would hit two more free throws to extend the lead to three with just under seven seconds and Lewis-Clark State held on for the tight fought victory.

Bennion added 15 points for LC State, including a 3-pointer with 1:51 remaining to cut the Owls’ lead to one and two free throws with 30 seconds to give the Warriors the lead for good.

“Davian and John had some big buckets and I thought Silas ran the show at a high level,” Johnson said. “Will and AP (Anthony Peoples Jr.) had some great minutes at the center spot. We have a short turnaround for a good and very well-rested Southern Oregon team. It will be a big-time test to see how we respond.”

The game broke down into a free throw shooting contest as the two teams combined for 57 attempts from the line, 46 of them in the second half. Lewis-Clark State finished 20-of-32 (62.5%).