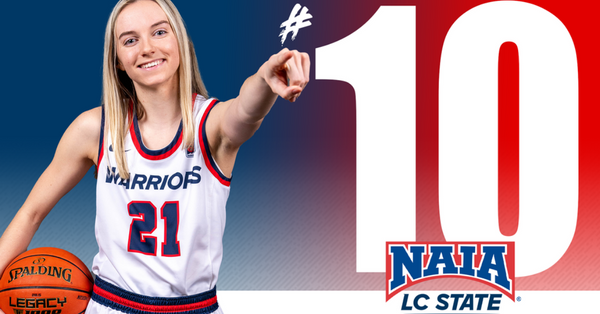 KANSAS CITY, Mo. – A victory over a top-10 team propelled the Warrior women to No. 10 in the latest NAIA poll. The three-spot jump comes after an 8-1 start to the season for LC State Women’s Basketball.

Since the last poll on Nov. 30, LC State is 4-0 with wins over conference opponents Northwest and Evergreen, a key upset victory over then-No. 9 Carroll College and a defeat of NCAA Division III George Fox. The Warriors rolled past Northwest 93-28 in dominant fashion before taking down TESC 61-53. LC had no problem with the rival Fighting Saints with a 62-50 final before capping the weekend with a 70-41 win over George Fox.

Conference foe Southern Oregon fell to No. 23 in the poll, while Eastern Oregon joined the top 25 at No. 20.

The Warriors travel to Oregon this weekend for CCC contests against Corban and Bushnell.