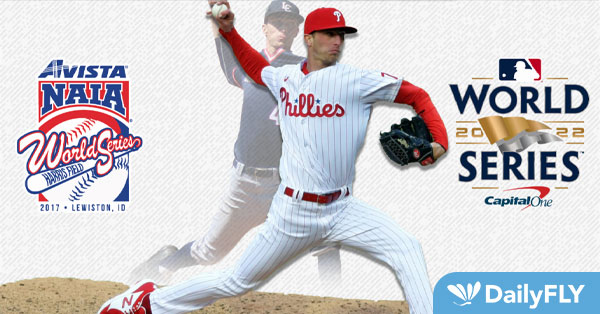 HOUSTON – When he suits up with the Philadelphia Phillies on Friday, Connor Brogdon will become the second LC State Warrior to ever appear on a Major League Baseball World Series roster. The two-time Avista NAIA World Series Champion will join Keith Foulke (Boston Red Sox, 2004) as the only Warrior alums to appear in the Fall Classic.

The Phillies battled their way through the playoffs. Philadelphia defeated the St. Louis Cardinals in the Wild Card game, took down the defending champion Atlanta Braves in the NLDS, then the San Diego Padres in the NLCS.

The right-hander has appeared in 47 games for the Phillies this season out of the bullpen with a 3.27 ERA. He has worked 4.2 innings so far through the 2022 MLB Postseason with six strikeouts and a 3.86 ERA. Brodgon has surrendered two runs on three hits in matchups against the Braves and Padres.

The 6-foot product of Madera Ranchos, Calif., had a solid senior year at LC State and helped the Warriors claim their 19th overall Avista NAIA World Series title in 2017. In the Series, he threw eight innings and gave up four hits, three walks and two earned runs in a 7-4 triumph over Keiser of Florida. Along with picking up the win, he struck out 10. Then on three days rest, he picked up his second win in the tournament with seven strong innings against William Carey. For his two performances, he was named to the all-tournament team.

In his senior season, Brogdon went 8-1 with a 2.91 ERA. He pitched in 15 games, starting 12, and threw 80.1 innings, which led the team. He allowed 25 walks and struck out 99, again the team high, and opponents only hit .219 against him. He was a part of two shutout victories and also earned a save during the year.