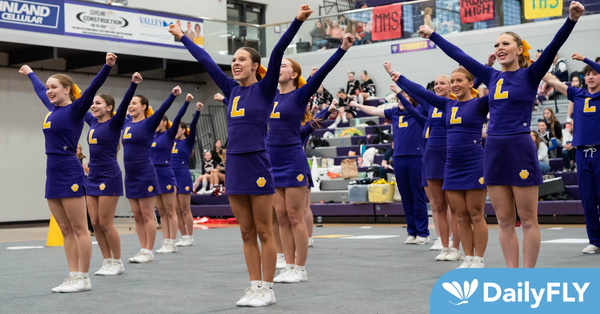 The LC Valley Invitational Cheer Competition took place Saturday, January 7, at Lewiston High School. Every year, cheerleading teams from around the region gather to compete and showcase their skills to the community. Teams spend months practicing and preparing elaborate, choreographed routines that display different aspects of the complex sport.

The following is a brief description of each routine:

“Pom” is a fast-paced dance routine with creative use of poms for visual effect.

“Sideline” is a cheer performance leading a crowd chant with intentional use of poms, signs, megaphones, and other props.

If you have any photos or information you would like to add from the event, send to [email protected] DailyFly News could not attend the competition, but received quotes from LHS Assistant Coach and SMS Head Coach Sydnee Soderberg about the event. Coach Soderberg said, “Being part of a community who comes together to support our girls is so rewarding! It was awesome seeing all of these young women come together to showcase their skills.”

LHS Head Coach Heidi Hagen stated, “It was great to have all of the area’s teams come together to showcase all of their hard work!”

Joviana Tyler, an LHS sophomore cheerleader, expressed her appreciation for the team saying, “I loved cheering with my teammates, go Bengals!”

Students also attended the competition in support of their classmates and surrounding community. LHS Senior Hali Vanhorn said, “It was fun watching the other teams perform their routines so early on in the season. It was also fun to support and cheer them on!”

Alea Anderson, LHS senior cheerleader exclaimed, “We can’t wait to represent the Bengals at the national level, all thanks to our awesome community!”

The Lewiston High School Varsity Cheerleading Team is set to compete at the USA National Cheer Competition in Anaheim, California on February 24th and 25th, 2023. The team is seeking sponsorships and donations to help cover costs of the trip. For more information and to donate, contact LHS Head Coach Heidi Hagen at (208) 413-0264.