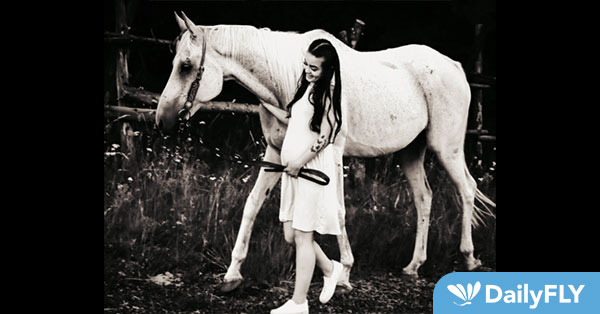 CLARKSTON – Haleigh Lange and her horse Darby have advanced to the next round in America’s favorite pet competition and need community members to vote so they can win $10,000 and be featured in InTouch Magazine.

Lange and Darby have been in first place for their group up until Saturday when they were brought down to second.

“Please go and vote for her and her horse Darby to get back to first so they can continue,” mother Jessica Lange said. “She has been riding since she was a child but she got to a point where she was losing her confidence and this big gentle giant helped her regain her confidence as a rider and in herself. He takes such good care of anyone who rides him. Even [now] when she is in her 3rd trimester.”

Lange explained Darby should win America’s Favorite Pet because he is a very special boy. She mentioned he loves having a job (and watermelon). Darby also makes it his mission to ensure everyone around him is happy with his goofy personality and his tongue sticking out.

“He makes sure to take care of anyone around him,” Lange said. “I questioned who I was as a horse person before I got him and he helped me regain my confidence. I’m pregnant and still feel safe riding him. I’ve put kids of all ages on his back, from the youngest being eight months and he knows there’s a little kid on his back.”

Community members can vote free daily. They can also verify with their debit card and will get two free votes daily. Lange mentioned it will take $1, however, it will be returned right away.

If individuals choose to pay for the votes as well, the money will go towards PAWS, which is a nonprofit that helps abused and abandoned animals.