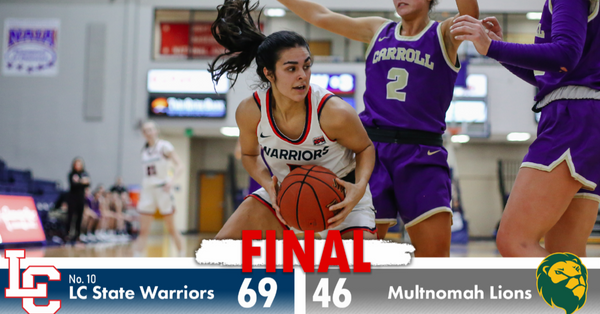 PORTLAND, Ore. – The No. 10 LC State Women’s basketball team closed out the first weekend of 2023 with a 69-46 victory over Multnomah on Saturday. Freshman Sitara Byrd became the first LC State Women’s Basketball player with nine steals in a game since Brittaney Niebergall in 2013 in the Warrior women’s 14th win in a row.

Three Warriors scored in double-digits, led by Callie Stevens’ 17. Ellie Sander added 15 and Maddie Holm notched her fifth double-double of the season with 13 rebounds and 12 points.

Multnomah came out hot to gain an 11-10 advantage after 10 minutes. Sara Muehlhausen scored two baskets and Holm added a pair of 3s to keep LC within one in a tight-scoring first quarter.

The Warriors turned things around and allowed just four points in the second quarter and nine in the third.

A free throw by Sander knotted the score 11 each before Holm gave LC the lead on a jumper a minute into the second frame. Lindsey Wilson, Sander, Stevens and Hannah Broyles ran the scoring streak to 15 with the help of steals by Sander, Holm, Broyles and Stevens to push the advantage to 22-11 by 4:46. The Warriors held Multnomah scoreless in the frame until 4:18, and Sander sparked another run with a layup less than 10 seconds later.

LC maintained its tight defense with a block by Muehlhausen, and a steal by Adyson Clabby led to a jumper by Mataya Green at 3:25. Sitara Byrd tallied five straight points to grow the lead to 31-15 before snagging a steal that led to a 3 by Stevens. Byrd snagged her sixth steal of the half to keep the defensive pressure high, and Stevens netted two free throws to close out the period with the Warriors in front 36-15.

Holm put back an offensive rebound to get the LC State offense going in the second half, and a steal by Sander led to a layup to push the cushion to 40-17 at 8:49.

Back-to-back layups by Stevens and Muehlhausen increased the margin, and a 3 by Stevens made it a 49-20 contest by 4:45 in the third quarter. Byrd’s seventh steal of the contest led to a basket by Green with 1:40 left in the frame and the Warrior women took a 51-24 lead into the final 10 minutes.

Sander and Stevens each drained a 3 early in the fourth quarter, and Sander added a layup after an offensive board by Holm to make it 60-31 at 6:54. Holm turned her 13th rebound of the game into a put-back and Sander took a steal back to the basket for a 64-35 lead midway through the frame.

Ella Nelson joined the scoring party with a triple on an assist by Wilson after a steal by Clabby. Green added the final LC basket in the contest in the 69-46 victory.

Stevens led all scorers with 17 points. She went 4-for-9 from the floor, 3-for-5 from 3-point range and 6-for-6 from the free throw line. Sander added 15 points with three steals and Holm’s 13-rebound, 12-point double-double also included a team-best five assists.

The Warrior defense was on full display with three blocks by Muehlhausen and two by Sander. Byrd’s nine steals were part of LC’s 19 as a team. LC State held Multnomah to a .276 shooting performance, .200 from 3-point range, and forced 25 turnovers. The Warriors shot .448 and scored 29 points on turnovers.