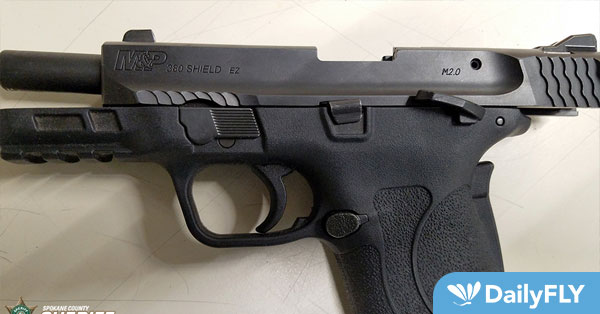 On Saturday, September 24, 2022, at approximately 7:35 am, Spokane County Deputy Jerry Moffett was traveling south on Argonne Road, near Trent. He was flagged over by an adult male motorist/victim who identified a black Buick Enclave and said the driver, later identified as 32-years-old Nathan H. Arguello, pointed a gun at him.

With heavy traffic, Deputy Moffett drove after the Enclave and conducted a traffic stop on the entrance ramp to I-90 from Mullan.

Arguello admitted he got into a verbal altercation with another driver but had no physical contact with the victim. Arguello denied pointing a weapon at the victim or even possessing a gun. He admitted to being under DOC supervision and only raising his hands as he drove near the victim.

A check of Arguello’s name revealed an active Washington State Department of Corrections felony warrant for his arrest. Arguello was taken into custody without incident for the confirmed felony warrant. A loaded pistol magazine was observed in the seat where Arguello was seated. Arguello said the magazine belonged to his ex, and he continued to deny that there was a weapon in the car.

Arguello consented to a vehicle search, and a second loaded magazine was located between the driver’s seat and the center console. When Deputy Moffett got to the locked glovebox, Arguello revoked his consent, stopping the search.

The adult female passenger was questioned and released at the scene without charges.

The vehicle was seized pending a search warrant which was later granted. Deputies also learned Arguello was a convicted felon (Unlawful Possession of a Firearm 2nd Degree (two counts) and Robbery 1st Degree)

On Tuesday, September 27, 2022, with a signed search warrant, Deputy Moffett, with the assistance of Spokane Valley Investigative Unit Detectives, began the search. The glove box was opened, and a semi-automatic handgun was found. The pistol had a round chambered but did not have a magazine inserted. A check showed the Smith and Wesson .380 was reported stolen in Kootenai County on July 23, 2021. One of the magazines found in the weapon belonged to the pistol. Additionally, a user amount of a controlled substance was located in the center console.

Arguello was booked into the Spokane County Jail on his felony warrant and additional felony charges of Unlawful Possession of a Firearm 1st Degree and Possession of a Stolen Firearm.

Deputy Moffett would like to contact the motorist/victim who reported this incident and asks him, or anyone else who witnessed this incident, to call Deputy Moffett at 509-934-7841. The male was driving a red 2-door hatchback, possibly a red Honda, Volkswagen, or similar vehicle that had been modified (lowered, sporty modifications). The motorist had dark, shoulder-length hair and was unshaven.