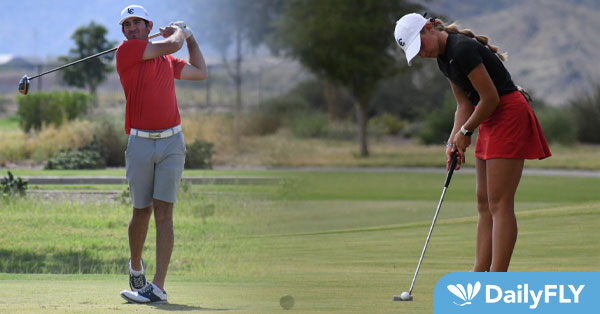 SURPRISE, Ariz. – Both LC State Golf teams were able to complete a round and a half before a massive dust storm suspended play at the Ottawa Fall Invitational on Monday. The tournament, hosted by Ottawa (Ariz.) at Sterling Grove Golf and Country Club, will conclude on Tuesday. The Warrior women currently stand fourth, while the No. 15 men are in fifth.

No. 12 Milligan (Tenn.) currently holds a four-stroke lead over No. 14 Ottawa (Ariz.) at 24-over and 28-over, respectively. Hope International sits third with a four-stroke advantage over LC State. The Warriors are 34-over par midway through the second of three rounds.

Senior Alexandra Schmidt leads LC State in a tie for sixth at 6-over through 27 holes. Kyla Currie it tied for 10th, two strokes behind Schmidt, and Kylee Hughes also sits in the top 20 at 12-over. Deana Caruso is in 21st (13-over) and Dallis Shockey is tied for 22nd a stroke behind Caruso.

Through the first round and a half, the Warriors women lead the field with 75 pars. Schmidt carded a pair of birdies on the back nine in the first round of action, and added a third during the second. Through her first 10 holes of the second round, Currie has three birdies to cancel out three bogeys.

“The girls are holding their own pretty well,” Head Coach Zach Anderson said. “It’s a very different course than we have played this year, so I am proud of the way they are grinding it out. There are three or four ranked teams in the tournament and they are right there in it. The girls have a chance to really prove to the NAIA that they deserve to be ranked with a strong finish tomorrow.”

The Warrior men are in fifth in the middle of the second round at 15-over, 13 strokes behind NCAA Division III No. 7 Claremont-Mudd-Scripps. The No. 4 Ottawa (Ariz.) B squad leads the field at 10-under just one stroke ahead of their A team. Arizona Christian is in third at 2-under.

Jorgen Lie Viken leads the LC men so far through the second round of play. The senior sits tied for ninth with even with par after a pair of birdies in the first round and one in the second. Sondre Andresen had a strong first round, shooting five birdies to finish the first 18 1-under. The freshman sits 3-over in the second round and it tied for 11th. Devon Caruso is tied for 19th (3-over), Elias Thedossopoulos is tied for 37th (10-over) and Carlos Davila is in 47th (17-over).

“The guys struggled today,” Anderson said. “It started off solid but we started leaking towards the end of the first and into the second round. We aren’t capitalizing on our chances and other teams are. We will need a big round tomorrow to get back into contention. This is definitely the best competition from top to bottom that we have faced all year, so it is good to see other teams we could possibly see in the postseason.”

The second round will resume on Tuesday, with the third round following.