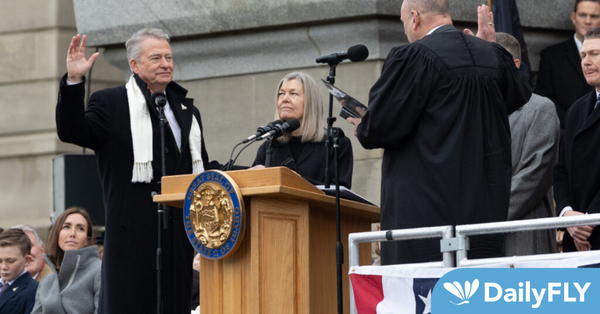 The first day in session will be highlighted by Gov. Brad Little delivering the annual State of the State address.

During the speech, which is scheduled to begin at 1 p.m. Mountain Time, Little will unveil his top policy priorities and budget recommendations for the year ahead.

The State of the State address is basically our Idaho version of the State of the Union address that the U.S. president delivers to Congress each year. Little will deliver the address to a joint session of the Idaho Legislature from the House chambers. Each of the 105 legislators, as well as Idaho’s statewide elected officials and Idaho Supreme Court justices, are expected to be huddled around Little on the floor of the Idaho House of Representatives as he delivers the speech.

Having won re-election to a second term on Nov. 8, Little will look to set the tone for the new legislative session, which is expected to be marked by uncertainty because of high turnover among legislators and within the House Republican leadership team.

“What we do here is far more important than any one of us,” Little said during his inauguration speech Friday. “The work we do here will outlive us. With that in mind, I want to sincerely thank the people of Idaho, to know that in my second term I will lead with integrity, civility, humility, always putting Idaho first.”

During a legislative preview event with the Idaho press corps on Thursday, Little signaled that public education and implementing the funding for public schools and in-demand careers authorized by the Sept. 1 special session law House Bill 1 will be at the top of the list of his 2023 priorities.

Here are three things to watch for during and in the aftermath of Little’s big speech:

The Sept. 1 special session law directs $330 million in new funding from state sales tax collections into public school education every year and earmarks an additional $80 million per year into in-demand career training and programs. By law, the money is there, but the decisions on how to divide it up, ship it out to public schools and spend it will be left to legislators and Little. Given the size and complexity of education budgets, which provide funding for 116 public school districts, more than 60 charter schools, about 20,000 teachers and about 300,000 Idaho public school students, there are bound to be multiple ideas and competition for funding and resources.

During Thursday’s meeting with the press corps, Little suggested that investments in pay for teachers and classified staff members who work for public schools could be on his priority list.

“We’ve still got work to do from a competitive standpoint for our teachers,” Little told reporters Thursday.

When legislative leaders met with the press Thursday, new Speaker of the House Mike Moyle, R-Star, said property taxes would likely be one of the biggest issues of the upcoming legislative session. Moyle said there is concern and a problem with property tax rates, which have been on the rise as Idaho remains one of the fastest-growing states in the country. In the same breath, Moyle stressed that the Idaho Legislature doesn’t collect or spend property taxes — local governments, taxing districts and public schools do — and Moyle said local governments need to do more to constrain their spending. Moyle didn’t unveil any specific solutions or proposals Thursday.

Although he didn’t spoil his own State of the State speech, Little also signaled Thursday that his attention may be shifting to property taxes and housing affordability following three consecutive rounds of state income tax rebates and reductions.

“… I anticipate that we have got some room to do some work there,” Little said, in reference to property taxes and housing.

Little and his budget lieutenants will issue new economic forecasts and budget documents Monday, but at last check in December, the state of Idaho was still building toward a projected budget surplus in excess of $1.5 billion.

How will Idaho’s governor and new legislators get along?

With the opening of the 2023 legislative session, there are 39 first-time legislators who will serve in the Idaho Legislature who are complete rookies. None of those folks were there during the regular 2022 legislative session or the Sept. 1 special session.

Although Little is a Republican governor who will again be working with a Republican supermajority in the Idaho Legislature, there are plenty of new faces and ideological differences. Little will be working with a new GOP House leadership team controlled by Moyle and a new-look Idaho Senate. The Idaho Senate for more than a decade has been viewed as a comparatively moderate legislative body that resisted the more extreme or polarizing legislation passed by the more traditionally unpredictable Idaho House of Representatives. But the Idaho Senate is expected to move to the political right due to the election of several conservatives — including Sens. Brian Lenney, R-Nampa; Scott Herndon, R-Sagle; and Ben Toews, R-Coeur d’Alene — and the movement of former conservative House members being elected to the Senate, including Sens. Tammy Nichols, R-Middleton, and Ben Adams, R-Nampa.

Little knows he will need to work with the new-look Legislature to pass his policy priorities, and he told reporters he has already held a series of meetings with new legislators — both at the Idaho State Capitol and in legislators’ home districts.

Any public reaction — positive or negative — from the new legislators and GOP House leadership team toward Little’s State of the State speech and budget proposals could be a harbinger of things to come.