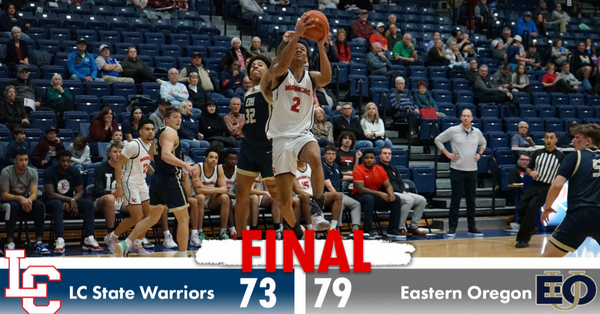 LEWISTON – A back-and-forth battle played out in front of more than 1,000 fans in the P1FCU Activity Center on Friday night, but it was the Eastern Oregon Mountaineers that emerged victorious with a 79-73 win over the LC State men.

Despite LC State outshooting and outrebounding the Mounties, the score sat tied 32-32 at the half before EOU outscored the Warriors 47-41 in the final 20 minutes.

With the loss, LC State falls to 6-6 overall and 3-3 in Cascade Conference play.

“Credit to Eastern Oregon,” Head Coach Austin Johnson said. “Their veterans really set the tone for the game and we were in catch-up mode for long stretches. We battled and when we were able to get shots we hit at a high percentage, but once again we struggled with taking care of the basketball with 20 turnovers. Tomorrow will be another big test against a talented and very well-rested College of Idaho squad. I am excited to see how our group responds.”

The Warriors opened the contest on an 8-0 run with tallies from Grayson Hunt, Silas Bennion and Davian Brown. LC held EOU off the board until 15:41 when the Mounties struck for six to cut the margin to two. Buckets by John Lustig and Anthony Peoples Jr. helped maintain a slim lead, but EOU responded to jump ahead 15-12 by 10:33.

A free throw by Oreon Courtney and jumper by Bennion evened the score 15-15 at 9:48, and the Warriors stretched their advantage to 23-16 at 5:47 with eight straight points by Davian Brown. Sam Stockton and Peoples Jr. kept the Warriors in a back-and-forth battle, and baskets by Hunt and Lustig fed into the 32-32 score at the half.

EOU came out with the first four points of the second half before a 3 by Brown brought LC within one, 38-37, at 16:41. The Mounties kicked the difference back out to seven by 13:04.

Lustig hit a 3 to spark the Warrior offense at 12:14 and added a pair of free throws after a layup by Bennion to knot the score 51-51 midway through. EOU went on a massive 14-point run to take control of the game en route to the 79-73 final.

Brown led all scorers with 21 points on three 3-pointers. He was 6-for-7 from the line, and Lustig added 13 points with a 5-for-5 night from the line. Lustig led the defense with six rebounds. Bennion added 12 points with six assists.

Phillip Malatare led EOU with 20 points including an 8-for-8 night from the line. Lapwai native Emmit Taylor added 19 points on three 3-pointers.