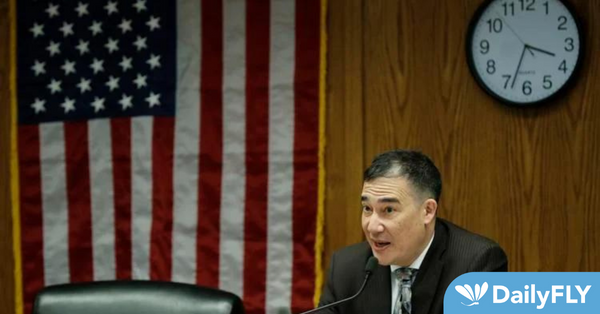 (The Center Square) – Steve Hobbs is the first elected Democrat in Washington state to serve as secretary of state in nearly six decades. Republicans previously held the Secretary of State Office dating back to 1964.

Hobbs was already serving in the position when he was sworn in Thursday afternoon in the Legislative Building’s State Reception Room at the Capitol Campus in Olympia.

That’s because Hobbs was appointed by Gov. Jay Inslee to assume the role when previous Secretary of State Kim Wyman left office in November 2021 to take an election-security position in President Joe Biden’s administration.

Washington State Supreme Court Justice Mary Yu administered the oath of office to Hobbs, whom she said “might be the most important state elected official in the state of Washington” due to his role “ensuring the integrity of our electoral system and the rule of law.”

She added, “Our electoral process is the way the people speak and choose their public servants. Secretary Hobbs, the people have chosen well.”

After administering the oath of office, a humble and grateful Hobbs – Washington’s 16th secretary of state – made some remarks.

“And it is an incredible honor to be here today, being sworn in as your secretary of state,” he said. “I would like to thank the voters of Washington. You have entrusted me with this important duty overseeing our elections, a task that is critical to the American experiment that we call a democracy.”

Hobbs brings a variety of experience to the state’s top elections office, including a mix of military and legislative service.

During his active duty U.S. Army career, he deployed to Kosovo and Iraq to participate in the security of elections during those tours, including distributing nomination ballot boxes in Iraq.

His time in the Army also saw him serve at the National Security Agency and graduate from the Department of Defense Information School, where he studied and analyzed cyberattacks and information warfare.

Hobbs is a lieutenant colonel in the Washington National Guard.

He is also a former legislator, having been a state senator for the 44th Legislative District representing Snohomish County before being tapped for secretary of state. Hobbs was first elected in 2006.

Hobbs pledged to continue efforts at keeping Washington’s elections secure in light of events over the last few years.

“Since I took the oath in November of last year, we accomplished a great deal,” he said. “We took on cyber- and misinformation threats to our elections. Those threats stemming from the 2020 election and the federal assault on our nation’s capital on Jan. 6.”

That same day, a group breached the gate of Inslee’s residence in the state capital of Olympia, prompting security officials to rush the governor to a safe room.

“Because of that, we reorganized our office teams, programs, and leadership structure to better serve the public,” Hobbs said. “We added an executive-level position to oversee elections and cybersecurity in all 39 counties as they administer their elections.”