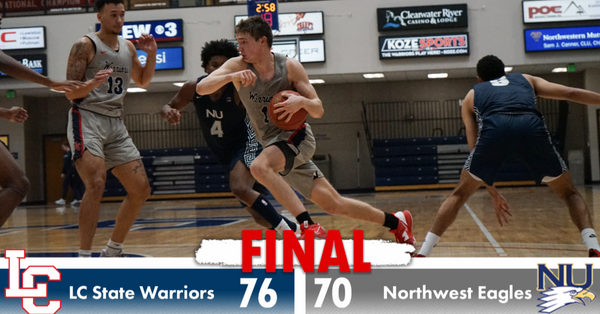 LEWISTON – Saturday’s contest between Northwest and LC State Men’s Basketball was a back-and-forth battle that came down the final minute, but it was the Warriors that earned the victory by a final of 76-70.

Freshman John Lustig continued his stellar campaign with a team-leading 17 points, and fellow first-year Grayson Hunt led the defense with a career-high 10 rebounds. He added 13 points for his first double-double.

The Warrior defense stepped up to outrebound Northwest 45-31 including a 17-7 margin with offensive boards.

With the win, LC State is 9-10 overall and 6-7 in Cascade Conference play.

“Really proud of our guys for finding a way to finish out a game when we didn’t have our best stuff,” Head Coach Austin Johnson said. “Grayson, Keegan (Crosby) and Oreon (Courtney) were awesome on the glass. Brennen (Newsom) is still trying to get healthy, but he gave us a spark when he first got in which was great to see. We got enough stops late to seal the deal.”

Lustig tallied the first five points for LC State before Keegan Crosby added a triple to tie the score 8-8 at 16:25. A put-back by Hunt gave the Warriors a slim 12-10 lead with 13:00 to play in the half.

Lustig and Silas Bennion drained 3s as the two teams went basket-for-basket. Oreon Courtney made back-to-back buckets and Sam Stockton added one to push the LC lead to 26-19 at 8:04. Crosby tallied two points on an assist by Hunt a minute later to cap the run.

Northwest chipped away at the LC lead before taking a 33-32 advantage in the final minute of the half. Lustig dropped in a layup in the final seconds to send the Warriors to locker room with a 34-33 edge.

The back-and-forth continued in the second half as buckets by Bennion, Hunt, Crosby and Lustig kept the score within a possession. Erick Chaney hit a 3 and Courtney fought his way to the basket as the lead continued to change hands.

A layup by Brennen Newsom and free throws by Lustig put the Warriors in front 59-58, and a layup by Newsom pushed the margin to 61-58 with 7:30 to play. The Eagles quickly tied things up with a 3-pointer 40 seconds later.

Northwest pushed ahead by four, but a triple by Bennion kept LC within one, 66-65, with less than four minutes on the clock. Hunt converted a pair of foul shots to tie things up 68-68 as the clock hit 2:00. A free throw by Courtney put the Warriors in front by one, and Bennion pushed the margin to 72-68 with a 3 with 1:04 to play.

Hunt grabbed an offensive board and dropped it back in to keep the Warriors in front by four as the seconds ticked down. Crosby added two free throws, and the LC State defense did the rest to secure the 76-70 victory.

Lustig led the Warriors with 17 points on a 3-for-5 night from 3-point range. Bennion added 16 points with three triples, and Hunt notched his first double-double with 13 points and 10 rebounds. Crosby tallied 11 points and eight boards.

“I’m happy for our guys to have the success that they had this weekend and to know they can accomplish challenging things when they stick together and compete with trust,” Johnson added.