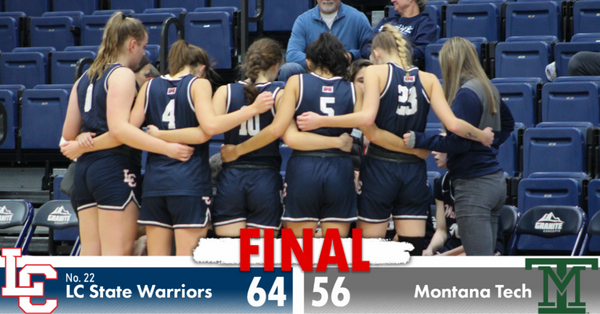 LEWISTON – The Warrior women showed that anyone can step up on any given night and be the spark for No. 22 LC State. Hannah Broyles and Maddie Holm did just that on Saturday in a 64-56 victory over Montana Tech in the P1FCU Activity Center.

Broyles led all scorers and tied a career-high with 21 points, while Holm matched a career-best with 17 rebounds, to go with her 17 points, and set a personal-record with seven steals.

“We played really well tonight, at times, and at other times we were flat-out bad,” Head Coach Brian Orr said. “We got out to a good start and our defense was a big reason why. That changed in the second quarter when we couldn’t make a shot and we didn’t take care of the ball, but I was proud of how hard we played tonight. Maddie Holm’s effort on the boards was amazing. You have to give Tech a ton of credit, they played really hard and made a late run to keep it tight to the very end. This was another one that will help us get better.”

LC State started the contest on a 12-2 run. Broyles started the stretch with a jumper at 8:25 before capping it with a 3 at 3:08. Ellie Sander scored four points in the rally and Holm hit a 3. Broyles tallied five more points in the final three minutes before two free throws by Callie Stevens ended the first frame with LC ahead 19-9.

Montana Tech cut the margin to three at 7:25 in the second period. Holm hit a layup and Broyles added a 3 to push the cushion back to eight, 24-16, at 6:48, but a run by the Orediggers made it a one-point game with the Warriors ahead 24-23 at the half.

Broyles got the second half started with a triple 30 seconds in. Stevens added a layup to give LC a 29-23 lead at the 9:02 mark, and free throws by Sara Muehlhausen and a bucket by Holm pushed the advantage to 33-25 a minute later. Holm sparked a seven-point rally midway through the third quarter, fueled by three points from Stevens and a layup from Sander, to grow the lead to 47-30 at 4:13, and a layup by Stevens made it 49-34 with 10 minutes to play.

Montana Tech battled back in the final frame to pull within three, 56-53, with 2:28 on the clock. A layup by Broyles shifted the momentum back to LC, and free throws by Stevens and Holm sealed the 64-56 victory.

Broyles led all scorers with a career-high tying 21 points, and Holm dominated all aspects of the contest with 17 points, 17 rebounds, and seven steals. Stevens added 15 points, seven rebounds, and six assists.