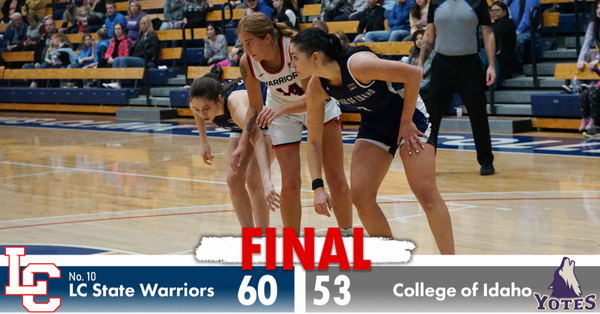 LEWISTON – The No. 10 Warrior women escaped Saturday with a narrow victory over in-state rival College of Idaho by a final of 60-53. LC State trailed 16-10 after the first quarter, but strong play from Maddie Holm and Sara Muehlhausen lifted the Warriors to their 12th straight win.

Holm notched a big double-double with 21 points and 14 boards. Muehlhausen was a defensive force with 13 rebounds and four blocks. Freshmen Sitara Byrd and Payton Hymas also stepped up to contribute valuable minutes off the bench.

With the victory, LC State is 12-1 overall and 7-0 in Cascade Conference action.

“I thought we started the game a step slow and C of I came out really on fire,” Head Coach Brian Orr said. “They were extremely physical all game and we struggled shooting, especially from behind the arc. Our bench came up big all game; Sitara and Payton really gave us a spark. Maddie was big-time, especially in the fourth quarter. I thought we did a good job of taking care of the ball and executing down the stretch to secure the win.”

C of I led by as many as nine points in the first quarter, with the largest margin being 16-7 at 1:47. Byrd and Lindsey Wilson helped chip away in the final minute to cut the deficit to 16-10.

The momentum carried over into the second frame with jumpers from Hymas, Muehlhausen and Holm to tie the contest 16-16 on a nine-point LC State run. Hannah Broyles put the Warriors ahead with a jumper at 4:21, and Holm followed with a 3 to make it 23-19. Holm drained a pair of free throws to cap the LC scoring in the half and keep the Warriors in front 25-24 at the break.

The Yotes rallied to regain the advantage, 30-29, at the 7:30 mark in the third quarter. C of I stretched the difference to three before Broyles, Muehlhausen and Byrd combined for six straight Warrior points to give LC a 37-34 edge at 2:27. The Yotes struck once again to cut the lead to one heading into the final 10 minutes.

Mataya Green got the momentum going for the Warrior women in the final quarter, and a six-point stretch with tallies from Ellie Sander and Muehlhausen grew the cushion to seven, 47-70, with 6:02 to play. Hymas notched an and-one play before a layup by Holm made it 52-42 a minute later.

Holm added six points in the final two minutes to secure the 60-53 victory for LC State.

Holm led the game in scoring (21) and rebounding (14) to go with two steals. Muehlhausen finished one board shy of her career-high with 13 along with seven points and four blocked shots. Sander and Hymas each scored eight points and Byrd grabbed five rebounds. Callie Stevens led in assists with four.

The Warriors hit the road to open 2023 with CCC contests Jan. 6 and 7. LC State will take on Warner Pacific first before facing Multnomah.