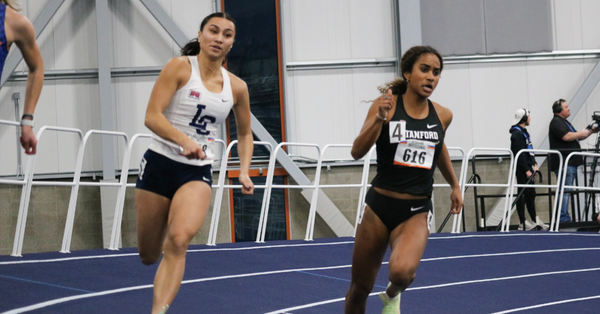 SPOKANE – Four LC State records fell on Saturday, and two more Warriors hit national-qualifying marks at the Spokane Indoor Challenge. London Kirk broke both the 200m and 400m records, with the 200m being a provisional time for nationals, while Anika Grogan (400m) and Sydnie Zywina (triple jump) etched their names in the LC State record books.

Kirk had a strong day at The Podium and earned his first national-qualifying mark. His school-record time of 49.06 in the 400m was good enough for a B standard and landed him in the top 10 at the meet. He went on to placed ninth in the 200m with an LC-best time of 21.99.

In his collegiate debut, Jedidiah Barnaby ran the second-fastest 60m dash in program history. He finished 22nd overall with a time of 7.18.

Connor Turpin got the weekend going with a win in the 5,000m run on Friday with a personal-best time of 15:24.40. Brycen Brown finished second (16:01.79). Friday’s action also saw Jaycob Atencio throw for a personal-best distance of 14.98m in the weight throw to improve his spot at third in the LC record books. He placed eighth at the meet, and Jonathan Wattles rounded out the top 20 with a 12.67m mark.

In field events, Trenton Johnson finished 12th in the triple jump with a mark of 13.40m. Sam Weller hit a personal-best mark of 12.79m to lead the Warrior men in the shot put in 23rd place. The mark ranks fifth all-time at LC State.

Sydnie Zywina highlighted the women’s field events with an LC State record in the triple jump. The sophomore leapt a distance of 10.89m to finish seventh in the field.

Jennah Carpenter ran the fifth-fastest 60m hurdles in program history to place 11th (9.49). Madigan Kelly finished sixth in the invitational section with a time of 8.98. The mark is an automatic-qualifying time for nationals, but Kelly punched her ticket at the first meet of the season. Sara Hathaway finished 13th in the 60m hurdles (9.52) and Ashley Britt was 14th (9.58).

Thrower Cassidy Henderson threw a career-best distance of 11.34m in the weight throw to finish in the top 25, and Emberlynn Mack (2.97m) and Desiree Winslow (2.77m) both hit PRs in the pole vault to increase their marks in LC State’s top-five all-time.

Carpenter saw action in the field events with a seventh-place mark in the high jump (1.61m) and 12th-place finish in the long jump (5.06m). Hathaway joined her in the long jump with a mark of 4.88m to take 18th.

The Warriors are back in action at the Lauren McCluskey Memorial Open, hosted by the University of Idaho, on Jan. 21.