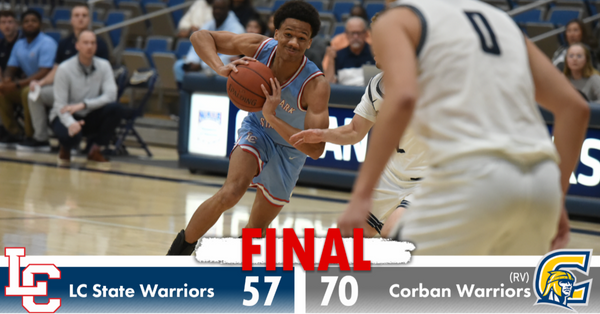 SALEM, Ore. – LC State Men’s Basketball fought all 40 minutes but ultimately fell to (RV) Corban University on Saturday night. The visiting Warrior men chipped away at the Corban lead throughout the contest but came up just short in the final minutes.

With the loss, LC State is 5-5 overall and 2-2 in Cascade Conference play.

“We had some great sparks and moments from different guys on the roster tonight which was good to see,” Head Coach Austin Johnson said. “Ultimately though, we were unable to match Corban’s toughness and urgency. I’m excited to see how we respond tomorrow against a very talented Bushnell team.:

The LC Warriors opened the contest with an early 7-2 lead on a basket by Keegan Crosby and five points from Davian Brown. A jumper by Oreon Courtney made it 9-4 in favor of the visiting Warriors at 15:17, and a 3 by Silas Bennion had the margin at 12-7 LC State at 13:22.

Corban rallied with a run of 15 points to jump ahead 24-14 by 3:26 before a layup by John Lustig snapped the stretch. The freshman added two free throws and a triple by Brown capped the run at seven to bring LC within three, 24-21, with a minute to play in the half. Kai Warren made a pair of foul shots in the final seconds to keep LC within five, 28-23, at the half.

The hosting Warriors scored the first six points of the second half to grow their lead to 34-23. Lustig hit a jumper, but Corban added short run to make it 39-25 at 16:50.

Anthony Peoples Jr. helped LC build momentum with a jumper before Bennion added another 3. Warren added two more free throws and a basket by Peoples Jr. had LC within 10, 44-34, with 13:42 to play.

Courtney made a free throw and Warren netted a 3 to keep the LC Warriors in the game, and free throws by Brown made it a four-point deficit, 44-40, with 11 minutes on the clock. Bennion added to the eight-point rally with a jumper to make it 44-42 before Corban snapped the run at 9:15.

Brown and Bennion each drained a pair of foul shots to even the contest at 46-46 with 8:25 to play. Two more free throw by Bennion kept things knotted 48-48, but Corban scored seven straight points to push ahead 55-48 by 6:15.

A triple by Lustig kept the difference within four, 58-54, but Corban answered to pull ahead 63-54 in the final two minutes. Brown hit another 3 to aid the LC State efforts, but the visiting Warriors fell short by a final of 70-57.