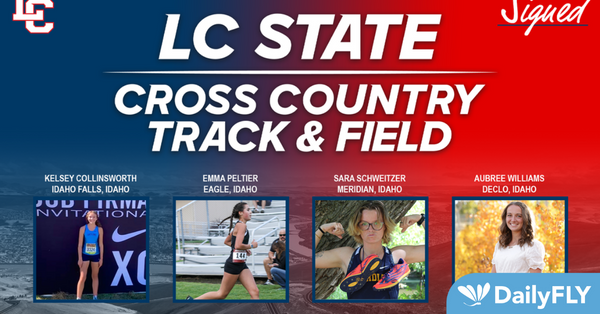 “We are excited about all four of these young ladies,” Collins said. “All bring to the program the ideals and vision that we have, and all are ready to contribute right away. They all understand and embrace our core concepts of ‘team’ and ‘family’ and the basic value of hard word. I have no doubt they will all continue to improve and be significant contributors to the continued success of our program. We are looking forward to seeing them in Warrior colors this fall.”

Collinsworth comes to the LC Valley by way of Skyline High School. The Idaho Falls native holds a career-best time of 21:13 in cross country and helped her team to a second-place finish at State. She also competed in track and field and softball.

Peltier will join LC State from Eagle where she attends Eagle High School. She holds a personal-best time of 19:05 in the 5k and 5:50 in the mile and has competed State three years in a row. Peltier was named the Sophomore, Junior and Senior Girl of the Year in the respective years and has been a team captain the last two seasons.

Meridian native Schweitzer comes to LC State out of Meridian High School. Relatively new to distance running, she helped her team to a win at the Timberlake Invitational and a sixth-place finish at State.

Williams will graduate from Declo High School this spring. She holds the school’s 5k record with a time of 19:18.8 and finished fifth individually at State her senior season. As a junior, Williams finished fifth in the 3200m, second in the 800m and seventh in the 1600m at State as a junior. She is currently in her class’ top 10 academically while also competing in soccer and basketball.