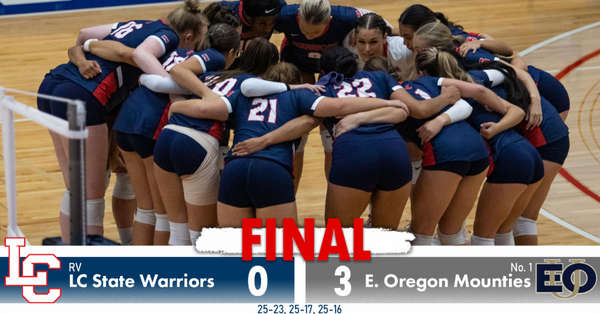 LC State went 1-2 on the week, with a win over Walla Walla at home, at remain on the road for more CCC action next weekend.

After a 4-0 start by EOU, Jada Wyms and Grecia Ung Enriquez slammed down back-to-back kills to cut the deficit to 4-2. The Mounties maintained a slim edge over the Warriors before kills by Lisi Langi, Channa Hart, Ung Enriquez, and Cassidy Nelson evened the set 14-14.

EOU regained the advantage at 17-14 to force an LC timeout, and Nelson came out swinging with three straight kills to tie things up once more. Back-to-back kills by Wyms and Langi again knotted the score 20-20, but the Mounties rallied for three straight points to take control. They closed out the set 25-23.

Langi started the second frame with a kill before joining Wyms on a block as part of a 3-0 opening run. EOU answered with six in a row to jump in front before a kill by Ung Enriquez snapped the stretch. The Mounties continued to build their lead with a four-point stretch at 12-5. The margin continued to grow with EOU in the driver’s seat as the set ended 25-17 in favor of the home team.

EOU opened the third with a 4-0 run before a block by Juliauna Forgach Aguilar madeit 4-1. The Mounties grew their lead to 6-1 before a kill by Wyms, block by Hart and Langi and an ace by Jennah Carpenter brought LC within two at 6-4. A kill by Langi made it a four-point stretch, but EOU regained its momentum to push back out to 14-8. Kills by Nelson and Hart cut the LC deficit to three, 15-12, but that as close as LC would get. Top-ranked EOU finished off the Warriors with a final set score of 25-16.

LC State is on the road again next weekend with matchups at Northwest and Evergreen State.