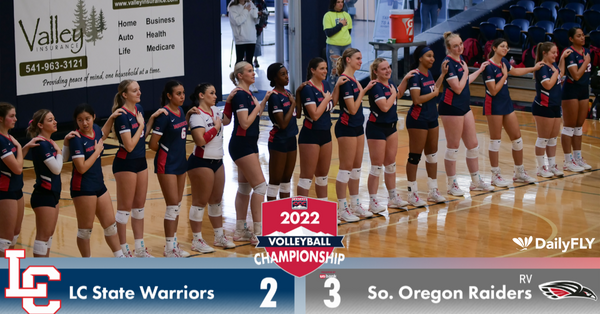 “The team fought hard, but just came up short,” Head Coach Shaun Pohlman said. “We started out passing and blocking really well and that fell apart in the second, returned in the third, but just lost it again in the fourth and fifth which kept us from getting any momentum.

“Looking at the big picture, we have a lot to be proud of this season,” Pohlman added. “We lose six seniors that are really awesome, so their efforts should be recognized as their careers come to an end.”

Kills by Jada Wyms and Lisi Langi got the Warrior offense started and a block by Langi and Channa Hart gave LC State a 4-2 edge to open the first set. SOU took advantage of Warrior errors to jump ahead 8-5, but a kill by Cassidy Nelson tied things up 9-9. Raider errors and back-to-back kills by Nelson and Wyms pushed the Warriors ahead 14-9 with a seven-point run.

A block by Nelson and Wyms kept the Warriors in front 16-12, and Grecia Ung Enriquez added a kill at 17-13. Langi, Ung Enriquez and Hart struck for three straight kills to grow the advantage to 20-15. Carli Berntson and Hart teamed up to deny SOU at the net before Berntson tallied two kills to push the score to set point, 24-17. Nelson ended the first set with a kill on an assist from Kenzie Dean at 25-19.

SOU took an early lead in the second frame, but kills by Langi, Wyms and Ung Enriquez kept the Warriors close at 7-4. Hart brought LC within two with a kill at 8-6, but the Raiders grew their lead to four and maintained the margin until a kill by Langi and an SOU error cur the deficit to two at 14-12.

Kills by Nelson and Berntson kept the Warriors within four late into the set but a surge by SOU closed the set out 25-18.

Nelson and Langi tallied kills to tie the third set 2-2, and a block by Langi and Hart gave LC a 3-2 lead. Berntson and Hart denied SOU at the net to even things up 5-5 but the Raiders gained a slim 10-7 edge. The momentum carried into a 16-13 SOU lead.

Ung Enriquez, Berntson and Hart each used assists from Esther Kailiponi to pull within one, 17-16, and a pair of swings by Wyms kept the difference at one at 19-18. A block by Hart and Ung Enriquez followed by an ace by Kailiponi tied the set 21-21, and two kills by Ung Enriquez kept things knotted 23-23. Wyms notched a kill before teaming up with Langi on a block to give LC a 26-25 lead as the set continued on into extra points. Back-to-back kills by Ung Enriquez on assists from Jennah Carpenter gave LC a 29-27 set win and 2-1 lead in the match.

The Raiders tallied the first two points of the fourth set before a service error put LC on the board. Ung Enriquez and Langi added kills to keep the deficit at one before a kill by Nelson tied things up 5-5. SOU went on a roll to take a 13-6 lead, and cruised to a 25-15 set win.

Nelson and Hart got the deciding frame started with a block before Carpenter dealt a service ace to give LC a 2-0 lead. A pair of SOU errors gave the Warriors a 4-3 edge and Langi kept them in front with a kill at 5-4. The Raiders responded with the next four points to take an 8-5 as the teams switched sides.

SOU stretched its lead to 11-6 before a kill by Ung Enriquez cut the scoring run. A service error brought LC within four, 12-8, and a well-placed kill by Berntson made it 12-9. The Raiders ended the LC State season by taking the fifth set 15-11.

Ung Enriquez led the match with 15 kills on a .333 attack percentage and notched a double-double with 11 digs. Nelson and Wyms added 11 kills each to cap their careers, and Langi chipped in 10 with three blocks.