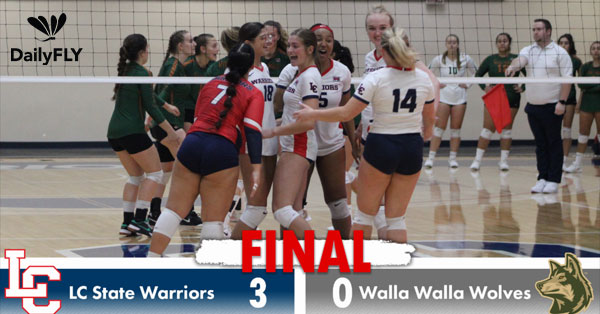 LEWISTON, Idaho – LC State Volleyball made quick work of the Walla Walla University Wolves on Monday night, taking the match in three sets (25-12, 25-14, 25-21). With the victory, the Warriors improve to 13-6 overall and move into a tie for third in the Cascade Conference at 9-5.

“It was nice to be able to get the W on this one in three, while being able to switch up our personnel throughout the match,” Head Coach Shaun Pohlman said. In total, LC State used 16 different players in the contest.

The Wolves quickly built a 7-5 lead over LC in the opening minutes of the first set, but a six-point serving run by Esther Kailiponi put the Warriors in the driver’s seat. Jada Wyms tallied a kill in the stretch before teaming up with Cassidy Nelson on a block to give LC a 13-8 advantage. The Warriors put together a 12-3 run to close out the frame. Grecia Ung Enriquez had four kills and an ace during the rally, Langi had three, Katie Rainville added one and Nelson dealt an ace.

The offense raged on in the second set with four consecutive points. Nelson started her serving run with an ace, and Langi and Wyms notched back-to-back kills. Freshman Juliauna Forgach Aguilar joined in with a kill to make it 5-1, but Walla Walla chipped away to pull within one at 9-8.

The game of runs continued as the Warriors went on a 15-3 tear to take a commanding 24-11 lead. The stretch featured kills by Wyms, Forgach Aguilar and Carli Berntson, aces dealt by Nelson, Jennah Carpenter and Forgach Aguilar, and blocks by Channa Hart and Langi. A WWU error ended the set 25-14.

The Wolves picked up the pace in the third frame with an 8-6 lead, but kills by Kierstyn York and Nelson fueled a short burst to put LC back in front 10-8. Forgach Aguilar put up a solo block before tallying two kills to push the margin to 16-13 before the Wolves rallied to tie the set 20-20.

Forgach Aguilar and Wyms tied for the team-lead with seven kills, with Wyms doing so at a .500 attack percentage. Kailiponi dealt 19 assists, Carpenter dished out 10 and Kenzie Dean collected 12 digs. Kendzee Cloward tallied nine digs and Madison Kammuller had eight.

The Warriors dealt 11 service aces, led by four from Nelson, the CCC leader in aces with 45. Forgach Aguilar served up a career-best three and Carpenter had two. LC hit .280 as a team.

The Warriors face a tough road trip over the weekend with contests against rival College of Idaho and No. 1 Eastern Oregon. LC State took the first meeting this season with C of I 3-1 but was dropped the matchup with EOU 3-1.

“We are looking forward to the weekend’s matches against C of I and EOU,” Pohlman said. “This is a quick turnaround so we will need to be diligent with our time this week. We don’t want to overdo it, but we need to also be prepared because both teams are tough. CI’s record is not indicative of their ability as a team; they had the injury bug and COVID early in the season. They are a tough team and are competing well, and EOU is currently the No. 1 ranked team in the nation. This will make for a great week of competition on the road for the next two weeks. This is where we get to see how deep we can dig.”

Following the trip this weekend, LC State will head to Northwest and Evergreen State. The Warriors fell to both at home earlier this season.

Stay up to date with all things Warrior Athletics at lcwarriors.com and on social media @LCWarriors