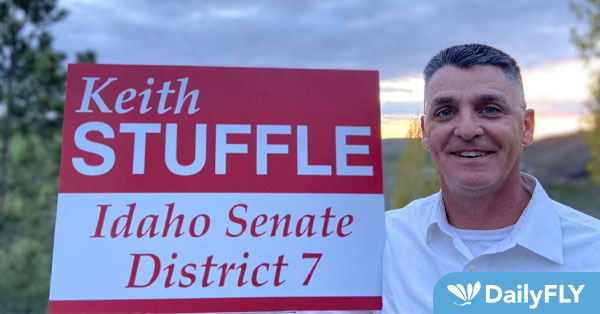 LEWISTON – Keith Stuffle is running for District 7 State Senator to represent his beloved hometown region as a conservative, simple man of faith.

Stuffle is a Lewiston High School world history and government teacher, track coach, dedicated husband, father, and more, who has represented the region throughout his entire life. From college track and field to persevering and qualifying for the Olympic Trials, Stuffle has proven to accomplish whatever he sets his mind to, with hard work and dedication.

“As far as being a politician, I never dreamed of it,” Stuffle said. “Where God leads he provides, and I felt a calling to give back. Someday I want to make sure I can tell my kids I tried if things ever go bad.”

As an educator, Stuffle has a plethora of ideas to fix the issues in Idaho’s public schools, if elected. The first is school choice. He explained public education is not the only model for students, and parents deserve to have a say in where their children are educated.

Stuffle also mentioned he sees first-hand that a one-size-fits-all education doesn’t work for young Idahoans. He further explained he would like to see students have the option to take classes in a field that interests them.

“They are forcing kids to take classes they are not interested in,” Stuffle said. “I want to see us provide options to learn something practical. We can have them out working with a carpet installer for example.”

Holding students accountable is another issue he believes needs to be tackled in Boise. Stuffle explained if elected, he plans to work on a Child Honor Roll Tax Credit. This would allow parents to receive a set amount of money straight off their taxes, similar to the Grocery Tax Credit. Stuffle mentioned this will motivate parents to take more of a role in their child’s education, helping each student succeed.

The current growth Idaho is seeing comes with another set of solutions Stuffle plans to provide if elected. He mentioned Idaho should welcome the growth it is seeing and plan ahead. Stuffle further explained the legislation needs to strengthen Idaho’s infrastructure and work on providing more affordable housing.

“If there are people coming because of our freedoms and lifestyles, I think that is wonderful,” Stuffle said. “When we have like-minded people, it only makes us stronger. However, government officials need to pay attention to this mass amount of growth. Look at Bryden Canyon at 5 p.m… There are [also] people in fixed income that are being taxed out of the homes they have lived in their whole lives. This is not okay.”

As a State Senator, Stuffle vows to strengthen and practice the powers reserved by the state every day in office. He mentioned Idaho is a state that can stand firm, not allowing anyone to tell its people how to live their lives.

“I will vote on a real simple basis,” Stuffle said. “If it promotes freedom, I will vote yes. Anything else, I will vote no. I will always listen to the people and vote logically.”

After filing at the last second, Stuffle explained he threw his name in the race after years of community members pushing him, knowing he would not be able to campaign to his fullest.