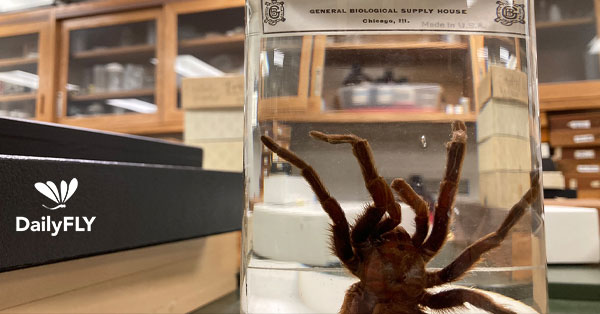 A resource for teaching and research, WSU’s collection of insects, arachnids, and myriapods is the largest in Washington, expanding by tens of thousands of collected and donated specimens every year.

“As human beings, we love to catalogue,” said Rich Zack, entomology professor and longtime curator. “We want to know what’s out there.”

The collection helps entomologists do that by providing real-life, just not-alive, models of insects, backed by a library of knowledge.  Since the 1890s, every specimen has come in with at least some information on where and when it was collected.

“That gives us the ability to understand change,” said research assistant professor Silas Bossert. “Our mission is to understand natural history and our place in the world.”

Keepers of the James collection say it ranks among the best in the nation in size, as well as historic and scientific value.

The oldest specimens date from the days of Washington Territory. WSU has large collections of insects from Washington, Idaho, and Oregon, and strong collections from other western states. Among extinct specimens kept here is the Xerces Blue butterfly, whose coastal Californian habitat has vanished.

Other gems of the collection include thousands of specimens taken by Zack and colleagues at the Hanford Nuclear Reservation, 500 square miles of land practically untouched since the 1940s.

“These represent species that used to occur in the greater Inland Northwest but have been eliminated because of urbanization and agriculture,” said Zack, drawing a Hanford case filled with tiny moths and butterflies. “But they still exist on the site, and we document them all.”

Living gems are here: Harlequin and jewel beetles brought back from Central American jungles. Zack has made a specialty of Guatemalan insects and says the James may have the second-best collection after Guatemala itself.

Among the largest animals in the collection: a ghostly White Witch moth with 10-inch wings from the jungles of Panama.

“I’ve collected these in the field,” Zack said. “They gently flutter in like a big white bat.”

Then there are the Hercules beetles from the rainforests of Central America: “huge but harmless,” Zack said. Up to seven inches long, males battle for mates by flipping opponents with their antler-like horns.

What’s the deadliest creature in the collection? Not a scorpion, spider, or wasp?

“There is nothing in the world, of any type of animal, that is more dangerous than a mosquito,” Zack said. The tiny flies spread malaria and other diseases that kill more than 700,000 people annually.

Nearly a third of the specimens here have never been positively identified. Categorized as “miscellaneous,” these may be studied by visiting entomologists or loaned to other institutions.

“They send us the insects we’re expert in,” Zack said. “Trades happen a lot between collections.”

Insect specimens aren’t sprayed or treated with fixatives. All that’s left of them is their exoskeleton—”everything else has dried up and disappeared,” Zack said. Carefully stored, these skeletons won’t crumble. “As long as we treat them with respect, they should last forever.”

Not technically part of the collection, living tarantulas and scorpions are kept in the department.

“Arachnids and myriapods are cool,” said collection director Elizabeth Murray. “Yes, some are venomous, but they aren’t going to seek you out to bite you. They all have a role to play in the ecosystem and generally are considered beneficial, too. I think tarantulas are beautiful and some make pretty good pets.”

In an increasingly digital age, entomologists are taking physical specimens online. Bossert and Murray are at work on a soon-to-launch digital collection of pollinators. A site on Pacific Northwest moths was created in partnership with Western Washington University, Oregon State, the University of Idaho, and USDA.

Insects are small, “but when you have millions, they add up,” Zack said. With new arrivals all the time, one of the biggest challenges is space, and the team is frequently working to make room in its first-floor location in WSU’s Food Science and Human Nutrition building.

The creatures here may be silent, but “we’re active and growing,” Murray said. “We’ve been serving the state of Washington since 1892, and we plan to be good caretakers of the insects so that they’ll be around for centuries to come.”