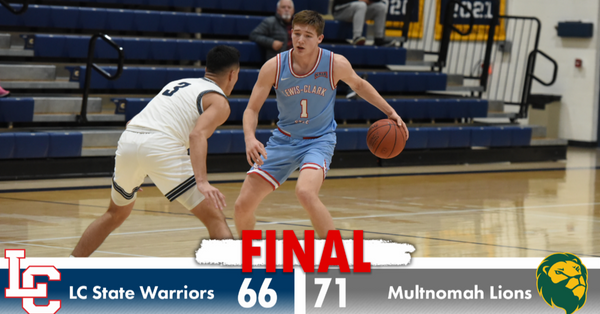 PORTLAND, Ore. – An LC State freshman had a career night for the second game in a row, but Multnomah erased a 12-point deficit to take the Cascade Conference contest 71-66. John Lustig led the Warrior men with a career-high 17 points and 10 rebounds for the first double-double of his career.

LC State falls to 6-9 overall and 3-6 in Cascade Conference play.

“Similar story where we battled for long stretches but didn’t have the juice to finish down the stretch,” Head Coach Austin Johnson said. “I thought we did a lot of good things tonight, but it still came down to a couple possessions that we weren’t able to close offensively and defensively. I still think we can achieve some big things this year if we keep believing and working.”

Lustig, Oreon Courtney and Grayson Hunt gave LC an early 8-4 edge against the Lions. Courtney threw down a dunk, followed by buckets by Silas Bennion and Lustig for a six-point run to grow the lead to 14-6 by 14:43.

Abram added four points to keep the Warriors in front 31-24 with three minutes to play in the half, and free throws by Chaney and Lustig closed out the half with LC ahead 34-24.

The freshmen duo of Lustig and Hunt combined for four points to give the Warriors a 38-26 advantage in the first four minutes of the second half. Multnomah rallied for 12 straight points to tie things up 38-38 at 12:58 to start a back-and-forth battle.

Lustig and Hunt combined for six points to keep the score within one before a 3 by Chaney gave LC a two-point lead, 52-50, with 9:08 on the clock. Free throws by Lustig and Hunt grew the advantage to 55-50, but the lead slipped away with a nine-point run by Multnomah at 5:21.

Five points by Crosby kept the Warriors within four with 1:40 to go and a triple by Warren made it a 69-66 game in the final minute, but the comeback fell just short.

Lustig led LC with 17 points and Chaney tallied 11 with three 3-pointers. Both Lustig and Courtney grabbed 10 rebounds, and Bennion dished out six assists.

The Warriors outshot the Lions .421 to .397 and grabbed four more rebounds (44-40). Multnomah capitalized with 16 points on LC State turnovers.