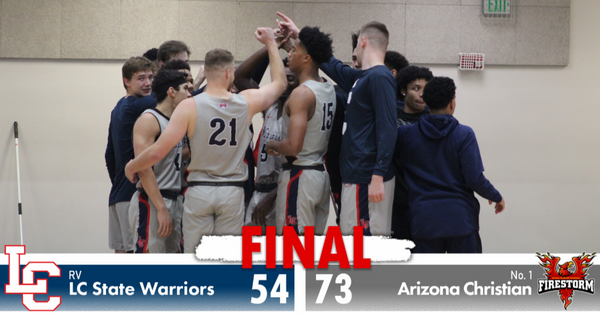 GLENDALE, Ariz. – The (RV) Warriors took on the top-ranked team in the NAIA to open the 2022-23 season and learned what it will take to make a run in the national tournament this year. LC State Men’s Basketball traveled to Glendale to take on No. 1 Arizona Christian in the season opener and fell 73-54.

Newcomers Keegan Crosby and Anthony Peoples Jr. led the Warriors with 12 points each in their LC State debuts, and Oreon Courtney led the defense with seven rebounds.

“It definitely looked like our first game and we did not handle the pressure well at all,” Head Coach Austin Johnson said. “Credit to ACU for speeding us up. It was good to see Anthony assert himself more, and I thought Sam (Stockton) did a really good job trying to keep us locked in.

“I really liked how we competed during certain stretches and I think we definitely can keep improving if we keep trusting our principles. I am excited to see how we respond to this individually and collectively.”

Arizona Christian took its largest lead of the half at 8:29 with a 12-point advantage (23-11). Crosby drained a 3-pointer and Peoples Jr. scored four straight points to make it 25-18 as the clock ticked down. Courtney and Crosby hit back-to-back jumpers in the final two minutes to send LC into the break trailing 31-22.

Bennion hit a 3 in the first 10 seconds of the second half to pull the Warriors within six points at 31-25. ACU responded with five to push the margin back to double-digits. The deficit grew to 17 (44-27) before a jumper by Peoples Jr. ended a run by the Firestorm.

Kai Warren netted a triple at 13:54, and Courtney struck for back-to-back buckets a minute later, but the Warriors could not catch ACU. Sam Stockton added five points down the stretch, and Warren hit another 3, but LC fell 73-54 to the NAIA’s top team.