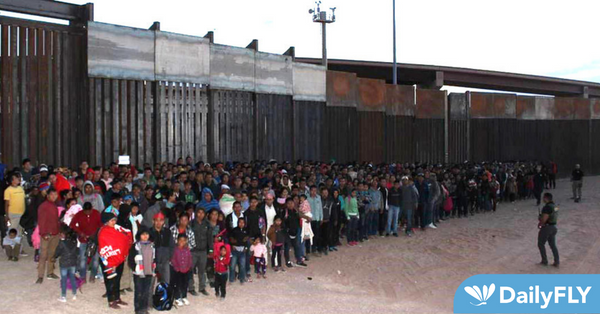 U.S. Border Patrol agents working in El Paso apprehend 1,036 illegal aliens. Agents took custody of the group members as they were attempting to illegally enter the U.S. in El Paso, Texas. May 29, 2019 Photo courtesy of U.S. Customs and Border Protection

(The Center Square) – Ahead of President Joe Biden’s visit to El Paso on Sunday, online videos from the city show the city began clearing the sidewalks of homeless migrants.

A local border security group organized by a Border Patrol agent’s wife plans a protest during Biden’s visit. Biden’s trip is his first to the southern border since he’s been president. His visit is to a sector where Border Patrol agents say they are overwhelmed with an influx of people. A border agent was shot there Thursday.

A humanitarian crisis developed in the city over the past few months, El Paso Mayor Oscar Leeser says. The city began busing thousands out last year but as numbers reached historic levels last month, Leeser declared a state of emergency.

On Dec. 6, Biden said he wasn’t visiting the border because he had “more important things to do.”

Nearly one month later to the day, he reversed course and on Thursday, said he was going to El Paso because the city “needed help.” He also announced he was expanding the parole process to release more people into the U.S., a policy over which he’s already been sued for allegedly violating federal law.

Irene Armendariz-Jackson, president of a Border Security Coalition and wife of a Border Patrol agent, has been posting videos online of the streets of El Paso before and after Biden’s announcement. One video posted Jan. 1 shows people lying on the ground next to each other wrapped in blankets.

“It may be a new year but it’s the same border crisis,” she said. “Here are some videos of El Paso just yesterday. A humanitarian nightmare is unfolding.”

On Jan. 3, local writer Ivan Pierre Aguirre posted video of people lying on the sidewalk in near freezing temperatures.

“With near freezing temperatures in El Paso early (6:45 am) this morning a group of migrants who stayed the night outside use the heat coming from the engine of a parked bus to try to keep warm,” he said. “When asked if they care about standing near the fumes they said they risk to try to stay warm.”

On Friday, Armendariz-Jackson posted video of the sidewalks completely empty.

When asked by a reporter about El Paso clearing the streets and if “the president [is] going to see a sanitized version of El Paso when he arrives at the border?” White House spokesperson John Kirby said on Friday, “The president’s very much looking forward to seeing for himself first hand what the border security situation looks like” and “was very much interested” in talking to Border Patrol agents “to get their perspective.”

But Armendariz-Jackson says the president’s trip is a charade and organized a protest to “send a message that Biden’s border visit is too little, too late.”

On Saturday, she said, “Joe Biden will visit El Paso to try and convince us we don’t have a crisis. I live here and know the truth. We’re living through a disaster. Joe Biden’s visit to our Southern Border will be nothing more than a sanitized photo-op. His dangerous open border policies have put the American people at risk.”

The National Border Patrol Council, the union that represents Border Patrol agents, also doesn’t take the White House claims seriously. It said in a statement, “El Paso being cleaned up as if nothing unusual ever happened there. Just in time for Biden’s ‘visit to the border.’ We suggest just landing in Des Moines, Iowa and telling him it’s El Paso. He’ll never know the difference.”

Biden announced his trip to El Paso on the same day an El Paso Sector Border Patrol agent was shot multiple times in the chest, as law enforcement across the border are increasingly engaging in shootouts with alleged smugglers.

The sector, which includes two west Texas counties and all of New Mexico, has reported record numbers of apprehensions and gotaways in the past few months. In December, according to preliminary data obtained by The Center Square, El Paso Sector agents apprehended a record of nearly 56,000 people and reported over 32,000 who evaded law enforcement.

The agent who was shot was stationed at the Lordsburg, New Mexico Station. Protected by his body armor, he survived.

The individual who shot him multiple times was suspected of smuggling, drove away, and was involved in a rollover crash a few miles from the initial shooting, authorities say. Border Patrol agents apprehended six people and took them into custody. An investigation is ongoing.

Despite previously claiming the city wasn’t receiving help from the federal government, prompting him to declare a state of emergency, Leeser said on Friday that “the federal government has been our partner on this humanitarian crisis and has provided much needed financial support as we assist with this critical federal issue.

“While President Biden is fully aware of the challenges we have been facing, it is always helpful to see things with your own eyes and we greatly appreciate him taking the time to visit El Paso and see for himself not only what we are faced with, but also the incredible collaboration among all our partners on this issue.”