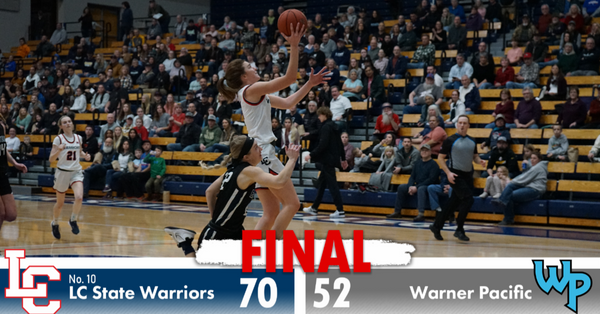 PORTLAND, Ore. – Ellie Sander scored 17 points in the second half to help lead the comeback for No. 10 LC State Women’s Basketball at Warner Pacific on Friday. Sander’s 20 points, coupled with Maddie Holm’s 16 rebounds, fueled the 70-52 victory.

The Warrior women trailed 28-25 at halftime but used a 15-point run in the third quarter to outscore the Knights 45-24 in the final 20 minutes.

With the victory, the Warriors increased their winning streak to 13 games for a 13-1 record overall and 8-0 in Cascade Conference play.

“Warner Pac came out playing inspired basketball,” Head Coach Brian Orr said. “Going into the game, I was hoping to get our bench a lot more minutes, but WPU played really hard all game and made us work for everything. We made some defensive adjustments at half and that allowed us to get some leak-outs that ended with layups. And we really shot well from long range, which was the big difference in the second half. Ellie, Hannah (Broyles) and Sitara (Byrd) all shot well from behind the arc and Ellie did a little bit of everything tonight. She had a great stat line. We did a good job of sharing the ball and whenever we have 20-plus assists, we almost always end up shooting a good percentage from the field.”

Sara Muehlhausen wasted no time putting LC on the board with an assist from Holm on the first possession. Holm kept the Warriors in front with a put-back after a scoring drought to make it 4-2 at 6:19. Callie Stevens pushed the margin to 6-2 with free throws, and a 3 by Sitara Byrd gave LC a 9-4 advantage at 3:20.

Warner Pacific tied things up 9-9 in the final minute of the opening quarter before taking the lead on a triple to end the frame.

Lindsey Wilson knotted the score 12-12 with a bucket on an offensive rebound at 9:21, but WPU answered with another 3 to jump ahead with 8:07 on the clock. The Knights stretched the difference to 20-12 with an 8-0 run, but back-to-back 3s by Ellie Sander and Hannah Broyles cut the deficit to 20-18 by 5:37. Muehlhausen kept LC within two, 22-20, midway through the quarter.

Muehlhausen and Broyles kept the offense going for LC State to keep the margin small, 28-25, at the close of the first half.

Sander tallied five straight points to give the Warriors a 30-28 lead in the first minute of the third quarter. Muehlhausen added a layup to make it a seven-point run, but WPU answered with its own run of seven to regain the lead 35-32. Holm, Broyles, Sander and Adyson Clabby combined for a 15-point burst to give LC State a 47-35 advantage by 2:09.

Holm answered a Warner Pacific basket with one of her own to push the lead to double-digits, 49-38, to end the quarter.

WPU struck for the first five points of the fourth frame to cut the LC State lead to 49-43. Sander snapped the Knights’ run with a layup on an assist from Stevens with 7:20 on the clock, and Muehlhausen and Stevens added to the LC total to keep the Warriors in control.

Stevens hit a 3-pointer after grabbing an offensive board at 4:30 to make it a 58-45 lead. Muehlhausen and Sander tallied a pair of buckets to grow the advantage to 62-48 with 2:24 to play, and a steal by Mataya Green led to a triple by Sander to cap a seven-point run 30 seconds later.

Byrd added a triple in the final minute and Stevens drained two free throws to bring the contest to an end.

Sander led all scorers with 20 points in the contest with a career-high eight field goals (8-for-14) and four 3-pointers (4-for-8). She also tied her career-best with five assists. Holm was a defensive force with 16 rebounds.