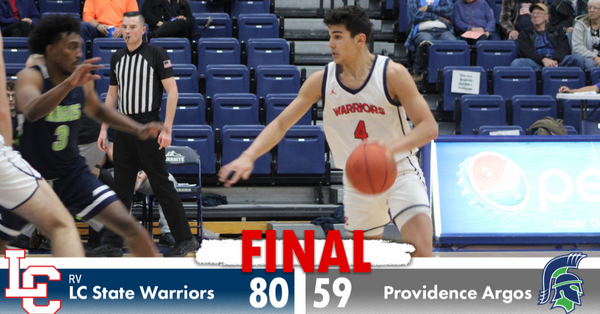 LEWISTON – A huge second half for (RV) LC State Men’s Basketball, fueled by eight 3-pointers, led to an 80-59 come-from-behind win over Providence (Mont.) on Saturday. The Warriors trailed 33-28 at the half and outscored the Argos 52-26 in the final 20 minutes.

Davian Brown led the second-half charge with 12 points, all on 3s, and Kai Warren stepped up with three triples for nine points. Silas Bennion put together a strong night with 18 points to go with a team-leading nine rebounds and six assists.

“We did a poor job of taking care of the basketball and keeping Providence off the glass in the first half,” Head Coach Austin Johnson said. “I was pleased with our response coming out of halftime both offensively and defensively. The ball moved better and guys took great shots. Defensively, Oreon (Courtney) really spearheaded things on the ball. Offensively, I thought Silas had one of the best games of his career, and Kai was a big spark hitting some clutch 3s. We’ll get back to work on Monday to prepare for a really challenging road trip to wrap up non-conference play.”

Bennion tallied five straight points as an answer to a 3 by Providence to open the scoring and kickstart a seven-point run for LC State. Brown gave the Warriors a 7-3 lead with a layup at 16:55, but UP regained momentum to tie things up 7-7. Back-to-back buckets by Grayson Hunt had LC ahead 11-7 at 13:32, but Providence battled back to take a 27-18 lead by 5:34.

Warren hit a 3 to chip away at the deficit, and baskets by Oreon Courtney and Bennion had LC within two, 27-25, with three minutes left in the half. Three baskets by the Argos had UP leading 33-28 at the break.

LC State regained the lead within the first 90 seconds of the second half. Courtney dropped in layup on the first Warrior possession of the frame, and Bennion drained a 3 20 seconds later. A jumper by Courtney had the Warriors in front 35-33 at 18:46.

Abram added back-to-back layups before Courtney gave LC its largest lead of the game, 25 points, with a layup to bring the score to 76-51 at 3:46. John Lustig scored the final basket for LC before the clock went off with the Warriors in front 80-59.