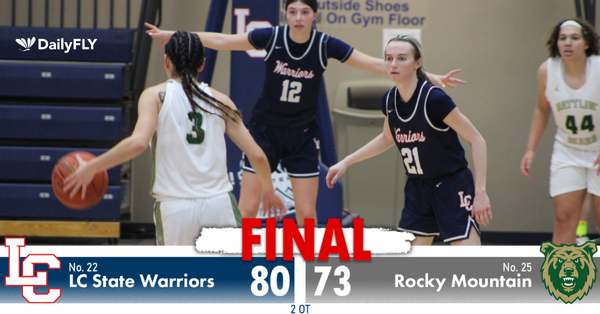 LEWISTON–No. 25 Rocky Mountain came out hungry on Saturday after No. 22 LC State rolled past the Battlin’ Bears 95-69 the night before. The former Frontier Conference foes battled through two overtime periods, but reigning Cascade Conference Player of the Year Callie Stevens stepped up to lead the Warrior women past RMC by a final of 80-73.

The contest was the third time LC State had gone into overtime with RMC, with Rocky taking the most recent battle in 2020. The Warriors defeated the Bears 70-65 in 2006 in an extra period.

“It looked like two different teams showed up for tonight’s game,” Head Coach Brian Orr said. “We weren’t quite as good as last night and Rocky made several adjustments on both ends of the floor and every possession became a battle. They were able to disrupt our offense and they also took advantage of some isolations against our zone. I thought our defense carried us, especially in the first half. Callie hit some big shots in the second half and we got several put-backs that proved to be the difference. I was proud of our composure, and we were able to find a way to win. And it was a big win.”

LC State got off to a hot start with a seven-point run. Ellie Sander got things going with a layup, Stevens hit a 3 and Maddie Holm added a jumper at 7:30. Hannah Broyles and Holm combined for five points on back-to-back buckets to grow the lead to 12-4 at 5:03, but RMC had trimmed the lead to 14-11 by the end of the quarter.

Stevens and Holm each drained a basket to start the second frame, and back-to-back buckets by Stevens pushed the advantage to 22-13 by 5:51. Broyles gave the Warriors a 10-point lead before Rocky hit a jumper to make it 25-17 in favor of LC at the half.

The Bears chipped away at the Warrior lead in the third quarter, tying the contest 37-37 with 1:31 to go in the frame. Payton Hymas and Sitara Byrd scored as the clock ticked down but RMC rallied to take a 43-41 lead into the fourth quarter.

LC State bounced back to jump back in front 50-45 at 6:51 on baskets by Stevens, Sara Muehlhausen and Holm, but RMC answered to knot things up 58-58 and force overtime.

Stevens drained a 3 off the tip in the first overtime period and hit another at 2:21 to put the Warriors up 64-62. Mataya Green added a basket to make it a four-point difference, but the Bears responded to tie things up once again at 66-66.

The Warriors put the Bears away for good in the second overtime frame. Broyles netted a 3-pointer in the first 10 seconds, and a free throw by Hymas and layup by Lindsey Wilson gave LC a 74-71 edge with two minutes to play. A triple and free throw by Stevens sealed the win for LC State, and a pair of free throws by Sander closed the game out 80-73.

Stevens led all scorers with 28 points and grabbed a career-high eight rebounds. She hit 11 field goals with five coming from behind the arc. Stevens led LC with five assists and two steals. Holm notched a double-double with a game-high 14 rebounds and 11 points to go with two steals and four blocks. Broyles added 14 points.

Muehlhausen blocked five shots to push her past the century mark. She now has 102 in her career and 10 this season. LC put up 10 blocks compared to one for RMC.