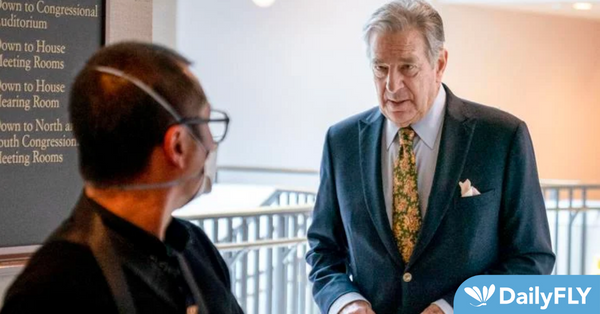 Paul Pelosi, right, the husband of House Speaker Nancy Pelosi, of California, follows his wife as she arrives for her weekly news conference on Capitol Hill in Washington on March 17, 2022. Andrew Harnik / AP

Police identified 42-year-old David DePape as a suspect in the home invasion and assault on Friday morning. When police arrived at the scene, they said they witnessed Pelosi and DePape fighting over a single hammer. Police then witnessed DePape pull the hammer away from Pelosi and start “violently assaulting” him, according to San Francisco Police Chief William Scott.

San Francisco Police said DePape is in custody and will be booked into San Francisco County Jail on several charges, including attempted homicide, assault with a deadly weapon, and elder abuse.

Scott confirmed Friday evening that DePape forced his way into the home early Friday morning, and told reporters that the attack was not random.

“This was intentional and it was wrong,” Scott said. “Everybody should be disgusted about what happened this morning.”

Drew Hammill, a spokesperson for the speaker, issued a statement Friday morning saying Paul was hospitalized and is expected to make a “full recovery.” He confirmed Speaker Pelosi was in Washington D.C. at the time of the attack.

Scott told reporters Friday that the motive for the attack is still under investigation. Several media outlets have reported that the intruder allegedly entered the home and yelled, “where is Nancy?”

DePape was found to maintain a blog that contained far-right conspiracy theories and antisemitic sentiments, according to the Los Angeles Times.

The police department, FBI, and Capitol Police have opened a joint investigation into the incident.

“As soon as it is complete, we will file charges and seek to prosecute the suspect to the fullest extent of the law,” Jenkins said.

Elected officials responded with horror to the attack.

“Horrified and disgusted by the reports that Paul Pelosi was assaulted in his and Speaker Pelosi’s home last night,” Senate Republican Leader Mitch McConnell tweeted. “Grateful to hear that Paul is on track to make a full recovery and that law enforcement including our stellar Capitol Police are on the case.”

Vice President Kamala Harris responded, tweeting that she was “appalled” by the attack.

“The entire Pelosi family is in our hearts and we wish him a speedy recovery,” Harris said.

Gov. Gavin Newsom issued a statement saying the “heinous assault is yet another example of the dangerous consequences of the divisive and hateful rhetoric that is putting lives at risk.”

“Our leaders should never fear for their safety and the safety of their families in serving the people they were elected to represent – not in their homes, not at the U.S. Capitol, not anywhere,” Newsom said. “Jennifer and I wish Paul a speedy recovery and send our thoughts to Speaker Pelosi and their family during this time.”