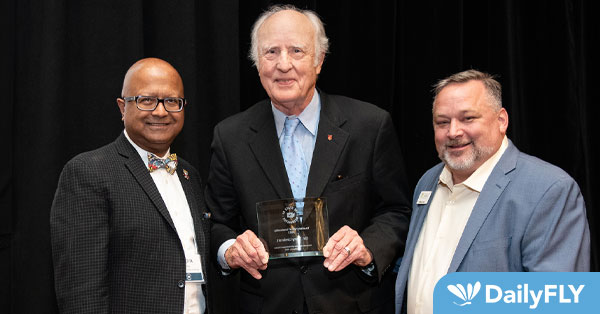 PULLMAN – Though nearly 15 years have passed since Terry Umbreit (’84), professor emeritus of hospitality, retired from a distinguished academic career at WSU, the excellence of his work is still being recognized.

On Oct. 13, Umbreit was inducted into the State of Washington Tourism Hall of Leadership for his significant, positive, and long-lasting contributions to the state’s tourism industry.

“We’re proud to honor Dr. Umbreit as an inaugural inductee in the Tourism Hall of Leadership,” said David Blandford, executive director, of State of Washington Tourism. “Dr. Umbreit is distinguished by his 25-year leadership of the Washington State University’s School of Hospitality Business Management, passion for education, and mentorship of so many of our tourism industry leaders.”

“For 50 years, my passion was to improve service experiences, the quality of student education and preparation for industry positions, and the importance of hospitality and tourism to local and state economies,” Umbreit said. “I’m grateful to receive this award that recognizes my commitment to service to education, hospitality and tourism organizations, and members of the community.”

Umbreit says he began to realize the magnitude of career opportunities to be had in hospitality and tourism in 1960 while working as a waiter during the Governor’s Conference at Glacier National Park. While on duty, he observed popular broadcast journalist Edward R. Murrow playing poker in the employee’s cafeteria. Later, he worked as a bellman at the Many Glacier Hotel during an extremely busy time when the World’s Fair came to Seattle.

“These events and experiences influenced my thinking that the industry was exciting and offered opportunities,” he said. “I developed a passion for business and improving service experiences.”

Umbreit pursued an academic career and joined the WSU hospitality business management faculty in 1975 and was consistently ranked among the most cited hospitality faculty in the world for his research. In 1984, he was appointed director of the School of Hospitality Business Management (SHBM) and served until his retirement in 2008.

Under his directorship, the school earned a reputation for leadership and program innovation.

“I think the most important skill future hospitality/tourism professionals need to be successful is a passion for service,” Umbreit said. “You need to be dedicated to ensuring someone has a valuable experience. Of course, you need to like and be around people. You also need the ability to anticipate guests’ needs before they ask for something.”

He was instrumental in getting the hospitality program redesignated as a school within the College of Business and Economics in 2002.

The hospitality school, the fifth oldest in the country, continues to be ranked as the #3 program in the nation, thanks in part to his leadership.

Umbreit’s career has also been filled with service to the industry, from academic activities to appointments with professional organizations, committees, and programs. He served as chair and president of the International Council on Hotel, Restaurant, and Institutional Education, as a trustee of the Educational Institute of the American Hotel and Motel Association, and as president of the Washington Restaurant Association Education Foundation, a philanthropic organization he helped found in 1995.

In addition to the State of Washington Tourism Hall of Leadership induction, Umbreit holds some of the highest recognitions in his field. He received the Howard B. Meek Award from the International Council on Hotel, Restaurant, and Institutional Education in 2001, recognizing his lifetime contributions and outstanding service to hospitality education. In 1992, the national council honored Umbreit with its achievement award in recognition of their significant and innovative contributions to the field. He was inducted into the WSU SHBM Hall of Fame in 2019.

“The most rewarding thing in my work is the satisfaction that you can really help others and make service a fulfilling career in hospitality/tourism,” Umbreit said. “The bonus is sometimes you get recognized for your passion and commitment to the industry.”