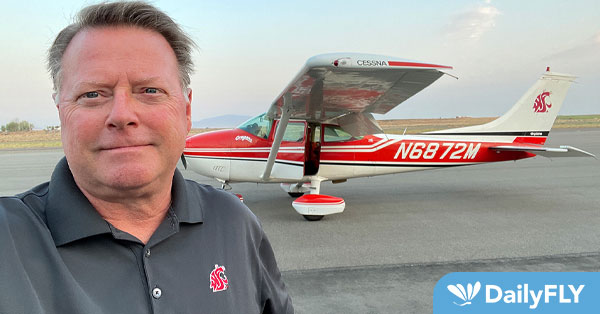 PULLMAN, Wash. – On August 20, Mark Showalter charted a course for crimson and gray glory. That’s the day the Tri-Cities business owner and devoted Washington State University alum boarded his Cessna and proceeded to fly a route in the shape of the university’s cougar head logo over the Palouse.

It wasn’t visible from the ground, of course, but plenty of people saw the design taking shape in real time using the latest in aviation tracking technology. Many more saw it when Showalter’s feat made local newscasts and spread via social media.

“There’s a whole new generation of Cougs coming home to Pullman, and what better way to welcome them than to wave the flag at 10,500 feet?” Showalter explained.

This WSU super-fan is a 1984 graduate with a degree in fine arts. He was the first in his family to attend college; his younger sister and his son followed him to WSU.

Showalter used a variety of technology to create the design in advance, but a late-stage glitch meant he couldn’t rely on autopilot to help execute it.

“I ended up on the ramp, the plane is running,” he recalled. “I had to make the go-no go decision. So I decided to take off with the understanding I was going to have to hand-fly the design.”

That meant navigating between the waypoints he had charted ahead of time.

“The first turn was a little late, the second turn was a little early,” Showalter said. “As I got going they started to get closer to where I wanted them to be. But you can see the hardest part about it were those darn whiskers.”

Because he and his wife had posted his plans ahead of time on the Die Hard Cougs Facebook page, people were following his progress using the FlightAware website. It took more than four hours and nearly 500 nautical miles to finish.

Showalter said he was motivated by gratitude for what WSU gave him.

“Washington State University was key in opening doors that would have always been shut had I not attended and gotten a degree,” he said.

Plus, Coug spirit is strong.

“Jim Walden really said it best,” Showalter said, referring to the former WSU football coach’s quote: “I can’t define it, I can’t tell someone who isn’t a Cougar what it’s like. There’s something that happens at Washington State… Washington State is a passion. Being a Cougar is a passion.”