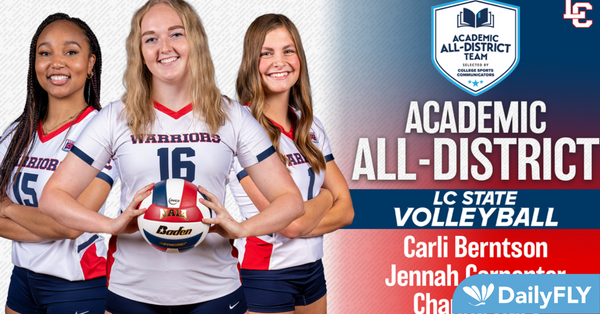 “‘Consistency of classroom effort’ is how I would describe these three and to get an honor like this is telling of that fact,” Head Coach Shaun Pohlman said. “As a program, we strive to be holistic in everything we do. We want to be about the whole athlete, and this award is an indicator of that. These three should be proud of their hard work and dedication. I know I am always proud to see our student-athletes and our team earn academic accolades.”

Hart earned CSC Academic All-District honors for the second year in a row after becoming the first volleyball player since 2018 to earn the award. The senior middle blocker tallied 72 kills at a .253 attack percentage and was third on the team in blocks with 56. The Menifee, Calif., native put up 48 block assists and eight solo blocks with a career-high eight blocks at Oregon Tech. Hart is working towards a degree in Psychology with a minor in Graphic Design and has held a 4.0 GPA through her four years.

Berntson has also maintained a 4.0 GPA throughout her four years at LC State as a Business Administration major with a double minor in Marketing and Economics. The senior right side notched 83 kills this season with a .209 attack percentage. The Cedar Hills, Utah native assisted on 18 blocks with three solos for a total of 21 blocks.

Carpenter stepped into a new role for the Warriors this season as a setter and finished the season second on the team in assists (434) and assists per set (4.67). The Lewiston native dealt 21 service aces and collected 117 digs. She tallied career-highs in assists (33) and digs (11) for a double-double against Evergreen State. The sophomore, who also competes on the track and field team, is majoring in Secondary Education Kinesiology and Middle School Math and holds a 3.88 GPA.

CSC updated the process this year so that individuals that meet the criteria earn Academic All-District accolades and automatically advance to the CSC Academic All-America ballot. To be nominated, a student-athlete must maintain at least a 3.5 cumulative GPA and be a starter or key reserve of sophomore standing or higher.