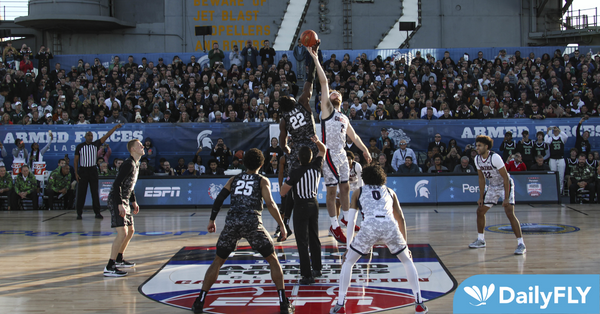 The game was held on Abraham Lincoln while in port at Naval Air Station North Island for the 2022 Armed Forces Classic – Carrier Edition – the first time the event has been held on an active U.S. Navy ship since 2011.

“It is truly an honor that, on Veterans Day in the centennial year of the U.S. Navy aircraft carrier, we hosted the Armed Forces classic basketball game on the flight deck of one of our most renowned aircraft carriers, USS Abraham Lincoln,” said Vice Adm. Kenneth Whitesell, commander, Naval Air Forces. “Those who serve, and those who have served, know that the military is the ultimate team sport, and I can think of no better way to salute our men and women in uniform than to celebrate this all-American pastime together on one of our nation’s capital warships.”

After canceling the 2012 Carrier Classic planned onboard the USS Yorktown (CV 10), due to condensation on the court, ESPN established an annual Armed Forces Classic as part of their week-long programming event America’s Heroes: Salute to Veterans, which is held every year around Veterans Day. The inaugural Armed Forces Classic was held in a C-5 Galaxy transport aircraft hangar on Ramstein Air Force Base. Since then, this annual NCAA Division I basketball game has been hosted at Camp Humphreys in the Republic of Korea, U.S. Coast Guard Air Station Borinquen in Puerto Rico, Marine Corps Base Camp Smedley D. Butler in Japan, the Stan Sherriff Center in Honolulu, Hawaii, Fort Bliss in Texas, and the Alaska Airlines Center in Anchorage, Alaska.

“What an honor and privilege it was to host Armed Forces Classic 2022 aboard Abraham Lincoln,” said Capt. Amy Bauernschmidt, USS Abraham Lincoln’s commanding officer. “There are a lot of similarities between the talented Sailors I am fortunate enough to lead every day and what I saw in the players on the court – they are all young, hard-working, and highly-skilled professionals that take pride in contributing to their team. It’s their hard work that makes the difference. This unique, premier basketball event is certainly a memory Lincoln Nation will treasure for years to come.”

ESPN and Abraham Lincoln closely coordinated to put together the event, beginning with ESPN’s first visit aboard following Lincoln’s return from deployment in August. The collaboration culminated with Sailors from the engineering department assembling the basketball court, bleachers for spectators, and lighting on the flight deck. The work completed allowed for 3,500 fans in attendance, in addition to space along vulture’s row and the observation decks on the island for Abraham Lincoln Sailors to watch the game.

“For me and my team it’s pretty powerful to get this unique opportunity to bring a piece of civilian life to service members on their bases,” said Scott Pomeroy, Associate Director of Events and Sales Operations for ESPN Events. “The Navy has been great, very hospitable, and gracious in helping us to make this event a reality.”

With the competitors arriving onboard, fans lined the stands before the game began on a crisp, partly-cloudy afternoon on Naval Air Station North Island with a full view of the San Diego skyline. The unranked Michigan State Spartans tipped off against number 2 in the nation Gonzaga University Bulldogs at 3:45. Play was paused during the game to retire the colors.

“This opportunity to play on an aircraft carrier in front of men and women who willingly put their lives on the line will be an experience that is going to mean something to the young men who will play in the game for a long, long time,” said Michigan State head coach Tom Izzo. “I said it the time we played North Carolina on the deck of the USS Carl Vinson – one of the most humbling experiences of my career, and I’ll say it again, we’re going to play one of the top teams in the country and we’re going to be hosted by the No. 1 team in the world.”

The Gonzaga Bulldogs beat the Michigan State Spartans 64-63. Capt. Amy Bauernschmidt presented a trophy to Gonzaga and an MVP award to Drew Timme.