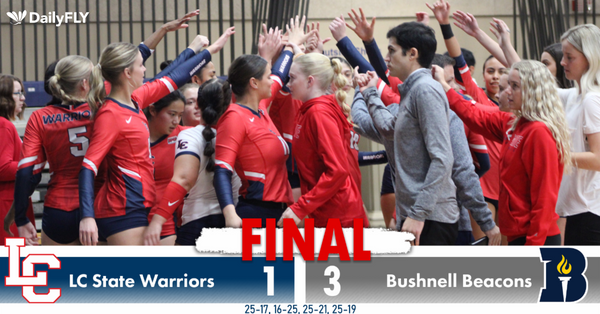 EUGENE, Ore. – Despite a 3-1 (25-17, 16-25, 25-21, 25-19) loss to Bushnell University on Saturday, Warrior Volleyball still has reason to celebrate. LC State is postseason-bound for the second straight season after clinching the No. 6 seed in the Cascade Conference Championship, presented by U.S. Bank. The tournament will be played next weekend in La Grande, Ore., with No. 1 Eastern Oregon as the top seed.

The Warriors will face third-seeded (RV) Southern Oregon in a quarterfinal matchup on Nov. 11 at 9 a.m. A full preview will be available on Thursday.

“We are excited to be heading back to the postseason for the second straight year,” Head Coach Shaun Pohlman said. “It’s a huge accomplishment for this team and it says a lot about our players’ commitment to building this program.”

Bushnell, who clinched the No. 4 seed in the tournament, came out hot against the Warriors with the first three points of the match. A kill by Cassidy Nelson snapped the Beacon run, but Bushnell surged ahead 8-3. A kill by Channa Hart sparked a run of four, featuring an ace by Grecia Ung Enriquez and kill by Nelson, to bring LC within one at 8-7. An 11-3 rally by the Beacons grew the deficit to 19-10 before the set finished with Bushnell ahead 25-17.

Nelson, Berntson and Lisi Langi added kills down the stretch to grow the cushion to 20-11, and an ace by Jennah Carpenter and kill by Ung Enriquez closed out the set 25-16.

Bushnell regained its footing in the third frame and jumped ahead 4-2. Back-to-back kills by Ung Enriquez tied things up 4-4, and Bushnell errors and a kill by Jada Wyms kept things knotted 9-9. The teams continued the back-and-forth until the Beacons rattled off four straight points to take a 16-12 lead.

A block by Seaman and kills by Ung Enriquez kept the Warriors within one at 17-16. Bushnell went on a run to push the margin to 23-18 before ending the set 25-21.

LC State responded with a 6-2 opening run in the fourth. A block by Hart and Langi was followed by an ace by Nelson to made it 3-0, and the Warriors scored three more on a kill by Ung Enriquez, block by Langi and Seaman and a kill by Langi. Bushnell picked up the pace with eight straight points to take a 10-6 lead. The Warriors stayed within four before a Kenzie Dean service ace and a kill by Ung Enriquez brought the score to 18-16, but LC could not get closer and fell 25-19.