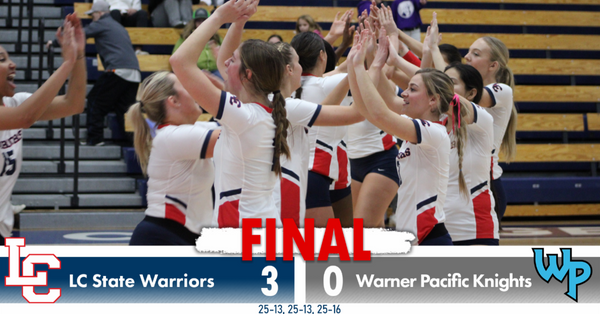 LEWISTON – The Warriors dominated nearly every aspect of the match on Friday night against the visiting Warner Pacific Knights. LC State Volleyball tallied 45 kills and 13 service aces to sweep WPU 3-0 (25-13, 25-13, 25-16) and improve to 15-9 overall and 11-8 in Cascade Conference play.

Grecia Ung Enriquez led the Warrior women with 15 kills, while both Lisi Langi and Channa Hart hit over .700. Kenzie Dean was unstoppable at the service line with 13 aces.

“We’ve really worked hard this week during practice to raise our standard in the gym,” Head Coach Shaun Pohlman said. “It was pretty grueling, but it was great to get the chance to see that work pay off tonight. We have pushed all year to control a match from start to finish. We were able to do that and then maintain that level of play while cycling through the entire roster. A very solid performance by the entire team.”

The dominance was clear from the beginning with a 4-0 LC State opening run. Four straight LC kills, with contributions by Langi, Ung Enriquez, and Jada Wyms all on assists by Esther Kailiponi, gave the Warriors all the momentum. A run of six with two aces by Dean and four kills by Ung Enriquez stretched the margin to 10-2 before a five-point rally made it 15-3.

Ung Enriquez kept things rolling with a kill and an ace, and Cassidy Nelson added three kills to give the Warriors a 21-9 cushion. Wyms, Ung Enriquez, and Hart each slammed the ball down to end the set 25-13.

An ace by Kailiponi gave LC a 2-0 edge in the second frame. Kills by Kailiponi, Hart and Ung Enriquez stretched the lead to 8-4, and a 5-1 run will big swings by Hart and Nelson made it 13-8. The Warriors rattled off seven straight points, fueled by kills by Langi, Ung Enriquez, and Hallie Seaman and back-to-back aces by Dean, to move the score to set point, 24-12. Seaman put LC State up 2-0 with a kill at 25-13.

Juliauna Forgach Aguilar came out firing in the third set with a kill and back-to-back service aces for a 4-0 lead. The Warriors went on a 9-1 tear with kills by Ung Enriquez, aces by Dean and Jennah Carpenter, and a block by Wyms and Ung Enriquez to blow the frame wide open at 13-4.

WPU rallied to pull within four at 17-13, but another LC run of four pushed the difference to 21-13. A kill by Forgach Aguilar and ace by Kierstyn York closed out the match with a 25-16 set win.

Ung Enriquez led the match with 15 kills. Langi added seven with a .700 attack percentage, Hart had five at .714 and Nelson added five at .625. Seaman tallied three kills on three swings. Kailiponi led in assists with 23, and Carpenter dished out 15. Dean led the defense with eight digs and Kendzee Cloward had seven.