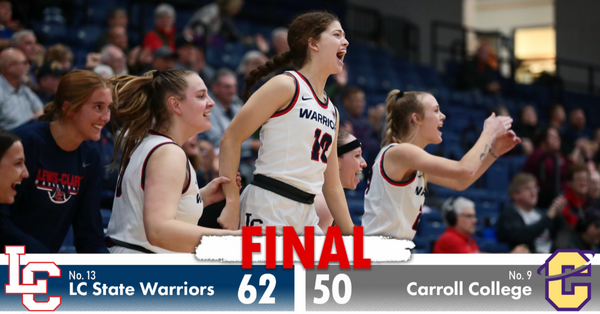 LEWISTON – Ellie Sander stepped up in a big way to help the No. 13 Warrior women to a victory over rival No. 9 Carroll College in front of 472 fans in Lewiston on Friday night. With a career-high 20 points from the sophomore, LC State earned its third straight upset win against the NAIA-powerhouse Fighting Saints by a final of 62-50.

With the key victory, LC State is now 7-1 on the season. LC State Athletics also collected 167 Teddy Bears in a halftime bear toss to benefit the youth of the LC Valley.

“That was a great team win,” Head Coach Brian Orr said. “I thought our defense carried us all night. Even when we had breakdowns we were able to recover and force them to take tough shots. This was a total team win. Ellie had her best overall game as a Warrior and every one contributed in a positive way. It’s always exciting when you can get a win against a top-10 team.”

Carroll opened the contest with a 3, but the Warriors responded quickly with seven to take the lead. Sander got the momentum started with a layup and free throw before a triple by Hannah Broyles and free throw by Callie Stevens made it 7-3 at 6:28. Carroll answered with the next six points to jump ahead 9-7 with 3:45 left in the quarter, but a 3-pointer by Broyles gave the Warriors a 14-12 advantage that they held for the remainder of the game.

Back-to-back buckets by Sara Muehlhausen and Stevens pushed the lead out to 18-12 in the first two minutes of the second frame, and layups by Lindsey Wilson gave LC a 25-17 lead by 4:12. Muehlhausen finished off the half with a jump shot to send the Warrior women into the locker room with a 31-24 lead.

The Warrior women allowed just seven points in the third quarter. A 3 by Broyles sparked a run of 13 points that was fueled by tallies from Sander, Muehlhausen and Payton Hymas. Sander capped the streak with a triple to make it a 47-30 LC State lead by 1:25.

Carroll fouled Sander three times in the final minute, and the sophomore converted on all six free throws to seal up the 62-50 win.

Sander led all scorers with her 20 points. She went 5-for-7 from the field and 9-for-11 from the line for a career-high in foul shot makes. She finished her night with six rebounds and four steals.

Broyles added 14 points with four 3-pointers, and Muehlhausen led the battle at the boards with 11 rebounds.

LC State held Carroll to a .290 shooting performance and just .222 from 3-point range. The Warriors outrebounded the Saints 49-38.