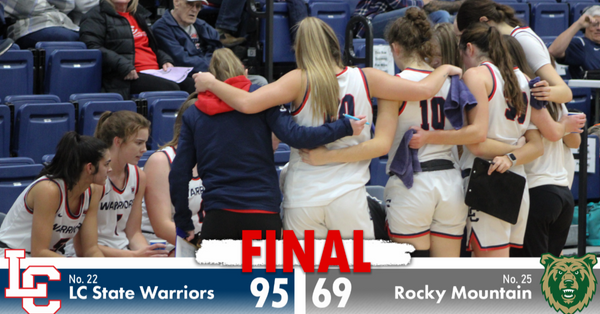 LEWISTON – Every Warrior contributed on Friday when the No. 22 LC State Women’s Basketball team upended No. 25 Rocky Mountain College (Mont.) 95-69. Each player in the game for LC State scored and grabbed a rebound in the total-team victory. Freshmen led the way, with Payton Hymas scoring 19 points and Sitara Byrd grabbing 12 rebounds.

“Tonight’s win was a total-team effort,” Head Coach Brian Orr said. “Everyone stepped up their game. Our starters got us going from the tip, and it was great to see our freshmen come in and really contribute. It’s nice to see the hard work we’ve been putting in during practice pay off.”

Ellie Sander wasted little time making her presence known in the first start of her career. The sophomore tallied a block, two rebounds, an assist and two points as part of a 10-0 opening rally. Hannah Broyles opened the scoring within 30 seconds of the tip, Maddie Holm hit a pair of 3s and Sander added a layup to give the Warriors a double-digit advantage by 7:00.

Two free throws by Callie Stevens and a layup by Lindsey Wilson followed a basket by RMC, and foul shots by Broyles and Hymas had the advantage at 17-6 with three minutes left in the quarter. Back-to-back buckets by Hymas and Sander, and two more free throws by Hymas, ended the first 10 minutes with LC leading 24-13.

Sara Muehlhausen caught fire in the second frame with seven points, including a 3-pointer, in the first three minutes. Triples by Stevens and Sander made it a 13-point difference, 41-28, at 3:57, and LC closed out the half with 3-pointers by Stevens and Broyles, as well as a free throw by Hymas, to take a 50-35 lead into the locker room.

Muehlhausen sparked a nine-point run in the third quarter to push the advantage to 61-38 by 6:19. A layup by Hymas opened a seven-point stretch that included five points from Stevens and LC led 68-42 at 3:23. The Warriors finished the frame with seven straight points on five points from Hymas and two by Byrd. LC held a 75-44 cushion at the end of the quarter.

A layup by Broyles kickstarted a nine-point span in the final frame to make it 84-46 by 7:20. A free throw by Hymas gave LC its largest lead of the night, 38 points, to cap the run. Buckets by Ella Nelson and Sander closed out the contest with the Warriors in front 95-69.

The Warriors outrebounded RMC 57-43 and held the Battlin’ Bears to a .309 shooting percentage from the floor and .281 from 3-point range. LC drained 47 percent of its shots and 45 percent from 3. The Warriors converted on 24 free throws and sent RMC to the line just 14 times.

The Warriors face off with the Battlin’ Bears once again on Saturday at 2 p.m. in the P1FCU Activity Center.