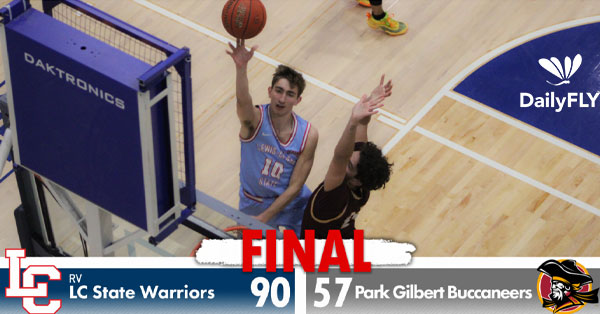 LEWISTON, Idaho – The men of Lewis-Clark State Basketball earned their first victory of the season with a 90-57 rout of Park Gilbert (Ariz.) to open the Clearwater River Casino & Lodge Classic on Thursday. Silas Bennion filled up the stat sheet with a team-leading 16 points, six rebounds and four assists.

The Warriors held the Buccaneers to a .351 shooting percentage and made 55.6 percent of their baskets. LC State spent a fair amount of time at the free throw line and converted on 24 foul shots.

“Pleased with our guys’ progress both offensively and defensively from our first game,” Head Coach Austin Johnson said. “Still a lot of areas to shore up, but it was encouraging to see the ball move like it did and get everyone involved. Silas had a great stat line and showed he can keep growing as a complete player. Sam (Stockton) helped us a lot as another ball handler and decision maker. We’ll get back to work tomorrow and prep for a really good Rocky team this Saturday.”

Will Abram started the game with a bang, throwing down a dunk to start the Warrior offense. The two teams traded baskets, including another dunk from Oreon Courtney, to keep the score close at 12-10 five minutes in. Back-to-back layups by Bennion and Courtney and three free throws by Bennion grew the LC State advantage to 21-14 by 10:50, and buckets from Sam Stockton and Davian Brown had the lead at 29-20 with eight minutes left in the half.

Brown hit a triple and Abram added a jumper to keep the difference at nine, 34-25, at 6:03. Grayson Hunt completed a three-point play before a jumper by Courtney and foul shots by Bennion and Brown made it 45-29 in the final 90 seconds. Bennion sent LC into the break with a 47-31 cushion with another pair of free throws.

Lustig hit six free throws in the final two minutes of the game to close things out 90-57.

Bennion and Lustig tied for the game-high with 16 points, Brown added 15, Abram totaled a career-best 11 and Courtney and Warren each scored 10. Every Warrior in the game grabbed a board, led by Bennion’s six. Bennion, Brown and Stockton each dished four assists and Stockton collected four steals.

LC State Men’s Basketball has Friday off to prepare for the final contest of the Clearwater River Casino & Lodge Classic. The Warriors will take on Rocky Mountain (Mont.) on Saturday at 4 p.m. in the P1FCU Activity Center.