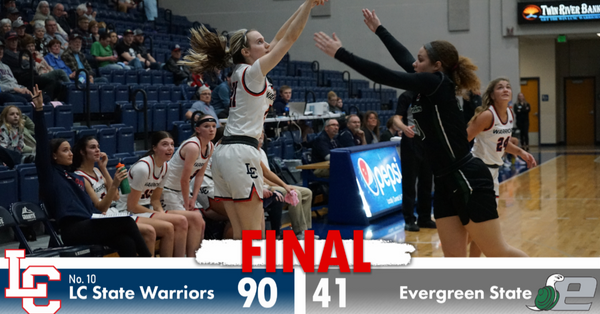 LEWISTON – The No. 10 Warrior women earned their 17th victory in a row on Friday behind 26 points from Callie Stevens. The junior drained a career-high six 3-pointers to help LC State overpower the Evergreen State Geoducks 90-41.

The Warriors totaled 19 steals, with nine in the first quarter alone, and held TESC to a .227 night from the field.

“I thought we played well on both ends of the floor tonight,” Head Coach Brian Orr said. “When Callie gets off to a great start like she did tonight, it ignites our offense and the confidence becomes contagious. I was very happy with our defensive effort and intensity. It produced a big discrepancy in points off of turnovers, and we were able to reach several of our game goals. This was definitely another total team effort and another step forward in our team’s development.”

The Warriors got out to a 7-0 lead in the first quarter with tallies by Sara Muehlhausen, Hannah Broyles and Ellie Sander. Stevens added 10 points to a 12-point run to push the margin to 19-2 by 4:18.

The offense continued to roll with baskets by Sitara Byrd and Broyles to begin the second period. Maddie Holm drained two straight buckets to make it 34-11 at 7:17, and the Warriors ended the half with 13 unanswered points to head to the locker room with a 47-15 lead.

Muehlhausen made it 15 straight points with a layup on the first possession of the third quarter. The Warriors held a 69-29 advantage heading into the last 10 minutes.

Freshmen Payton Hymas and Byrd kept the momentum going for LC State in the final quarter before Stevens added another 3 midway through. Back-to-back triples by Stevens and Ellas Nelson moved the cushion to 84-38 at 3:32, and Lindsey Wilson, Mataya Green and Byrd scored the final six points of the contest to close things out 90-41.

Stevens led all scorers with 26 points, including her career-high six 3-pointers. She was 10-for-14 from the field and 6-for-10 from 3-point range. Holm added 14 points and Byrd led the defense with nine rebounds. Stevens and Byrd each snagged four steals and Sander dished out four assists.

The Warriors shot .432 from the field and drained 12 3s. The defense forced 27 turnovers for 36 points off turnovers.

Lily Stewart led Evergreen with nine points and nine rebounds. The Geoducks fall to 7-8 overall and 4-8 in CCC play.

The Warriors wrap up the homestand on Saturday against Northwest. Tip off is set for 4 p.m.