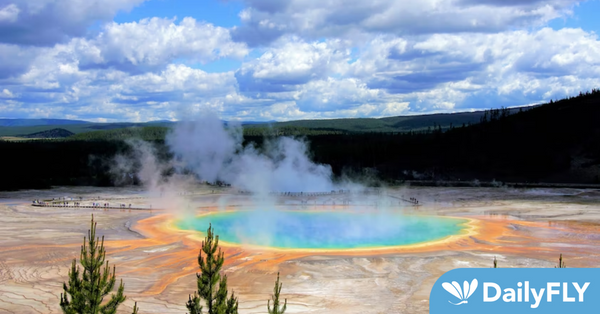 (Idaho Capital Sun) – The decrease in the frequency of eruptions may be a sign that the current episode of geyser activity is coming to an end, writes guest columnist Michael Poland.

(Idaho Capital Sun) – Any annual review of Yellowstone’s activity has to start with seismicity. Yellowstone is an active place in terms of earthquakes. Typically the University of Utah Seismograph Stations, which is responsible for the operation of the Yellowstone Seismic Network, locates 1,500–2,500 earthquakes every year in the region. Over the last several years, annual seismicity in and around Yellowstone National Park has varied about this average, including:

In 2022, there were almost 2,500 earthquakes located in the Yellowstone region. The largest event of the year was an magnitude 4.2 earthquake that occurred in the east part of the park on May 11—coincidentally, the first day of an in-person coordination meeting of the Yellowstone Volcano Observatory in Mammoth Hot Springs. The quake was broadly felt, including by YVO scientists, and was the strongest seismic event in the region since a magnitude 4.4 event in 2017.

As is common, there were also several earthquake swarms in the region. A swarm is a sequence of earthquakes that occur in roughly the same place in rapid succession, and on average about 50% of all earthquakes in Yellowstone occur as part of swarms.

These swarms are mostly driven by interactions between groundwater and existing faults. In 2022, there were 26 earthquake swarms, and these accounted for about 67% of located earthquakes during the year. The most significant swarm — by far — was in the area of Grizzly Lake, between Norris Geyser Basin and Mammoth Hot Springs. That sequence began during the summer and continued intermittently through the end of the year, contributing over 1,000 earthquakes to the annual total—an impressive number, but still just a third to a half of what has been recorded during the longest/largest swarms, like 2017’s Maple Creek swarm (over 2,400 located earthquakes in a three-month span).

GPS data did not detect any significant changes in surface deformation over the course of the year. Data from the caldera showed that the region continues to subside, as it has since 2015. Each summer, that subsidence pauses and may even turn to a slight amount of uplift as runoff from spring snowmelt percolates into the ground, which soaks up the water like a sponge.

Deformation is also recorded by interferometric synthetic aperture radar (InSAR) — a satellite technique that uses radar images from different dates to “see” the deformation that occurred over the time spanned. In 2021, there were indications that there might be a small amount of uplift along the north rim of the caldera (1 centimeter, or less than half an inch). That area is a site of historic uplift, which last occurred during the late 1990s. Comparison of satellite radar data collected in September 2021 and October 2022, however, reveals slight subsidence of that region, suggesting that the 2021 uplift signal was short lived and has since reversed itself.

Noteworthy geyser activity was mild in 2021 compared to previous years. Steamboat Geyser, the world’s tallest active geyser, remained active, with 11 major water eruptions during the year — a far cry from previous years (20 in 2021, 48 each in 2020 and 2019, and 32 in 2018). The decrease in the frequency of Steamboat Geyser eruptions may be a sign that the current episode of activity is coming to an end.

Speaking of water, no discussion of 2022 in Yellowstone would be complete without mention of the historic flooding that occurred in June. Heavy rains falling on late-season snowpack led to catastrophic flooding, especially in the northern area of Yellowstone National Park. The flooding was so intense that it was recorded by seismometers in the region! Although little monitoring equipment was impacted — only one river-monitoring site needed maintenance — major roads and other infrastructure were heavily damaged, and full recovery will take years.

Yellowstone Volcano Observatory scientists also gathered in Mammoth Hot Springs in May for their first in-person meeting since 2018. In addition to discussing science and monitoring results, a full-day “tabletop” exercise was held to simulate a volcanic event, providing a way to practice YVO’s response plan for geologic unrest. Insights from the exercise will be used to draft a new response plan, scheduled for release in 2023. Also in 2022, the observatory published its monitoring plan for the coming decade, laying out the strategy for upgrading existing systems and better tracking activity in Yellowstone National Park’s thermal basins.

While the year was noteworthy for the many improvements to monitoring infrastructure and overall knowledge of Yellowstone’s tectonic, hydrothermal, and magmatic systems, 2022 also saw the passing of an icon.

Robert “Bob” Christiansen, the founding scientist-in-charge of the Yellowstone Volcano Observatory, passed away in September. Bob led geologic mapping of the Yellowstone region and made major contributions to a greater understanding of volcanism in the western United States across a career that spanned nearly 60 years.

He will be sorely missed by his innumerable colleagues and friends.

We hope that you all had a relaxing and pleasant holiday season. From all the members of the Yellowstone Volcano Observatory consortium, take care, be safe, and best wishes for 2023.

Yellowstone Caldera Chronicles is a weekly column written by scientists and collaborators of the Yellowstone Volcano Observatory.