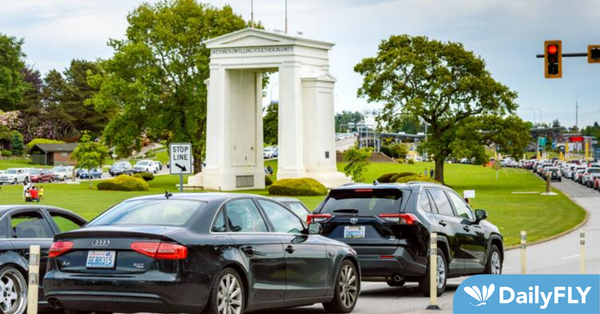 (The Center Square) — The extended Summer of Love has officially ended as Peace Arch Park, a unique gathering place for Canadians and Americans that saw international weddings, family reunions, and other gatherings that might otherwise have been impossible due to COVID-19 restrictions reopened from the Canadian side this week.

Pandemic restrictions imposed by the Canadian government had made the park a major rendezvous for Canadians and Americans, as the one place they could meet face to face without crossing a largely closed border. It became a major wedding destination and the nonprofit that supports the park memorialized this with “Summer of Love” T-shirts.

The park, which straddles the 49th parallel in Blaine, Washington, and Surrey, British Columbia, was closed from the Canadian side in June 2020 to prevent overcrowding during the pandemic, and finally reopened on Oct. 24.

Rickey Blank, a 50-year veteran of the Washington State Parks service and self-styled “lone ranger” of the park, took no issue with Canadians crossing a shallow ditch by 0 Avenue in Surrey to meet with Americans, despite the restrictions imposed by Canada.

“I would have never imagined anything like this ever happening. Our borders are closed and people from America and Canada are just unable to share time together. This is a special spot, right now in this time, for folks to go ahead and meet,” Blank said according to a 2020 report. Blank also called Peace Arch an outstanding place to meet people from all over the world.

Peace Arch Park is a shared space between Canada and the United States. It was dedicated in 1921 to commemorate the enduring peace between the two nations.

Peace Arch Historical State Park is accessible at 19 A Street, Blaine, from 8:00 a.m. to dusk.