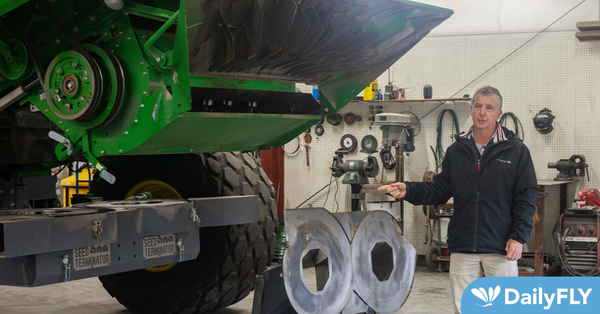 A key to the battle against herbicide resistance in weeds could come from Down Under.

Michael Walsh, an associate professor at the University of Western Australia, spent a week at the Washington State University Pullman campus this fall, discussing herbicide resistance and weed seed control with farmers in the surrounding region and giving a seminar to scientists in WSU’s Department of Crop and Soil Sciences. Walsh thinks impact mills—physical weed seed control systems that attach to combines and are widely used in Australia—could hold promise for the Pacific Northwest.

“Having an international visitor isn’t common, and it allows us to increase the visibility of the harvest weed seed control concept,” Lyon said. “It’s valuable to WSU to have an expert visiting from so far away. People tend to pay more attention when they hear that.”

Australia has fought herbicide resistance in weeds since the early 2000s, forcing growers and researchers to develop new systems and techniques for their small grains cropping systems. These could also be successful in the Inland Northwest.

“Australia has been further ahead of us with resistant weed problems,” Lyon said.

Lyon hopes Walsh’s visit will support a mutually beneficial sharing of knowledge between WSU and Australia for years to come.

“CAHNRS and WSU want to increase international collaborations from a research standpoint and an educational standpoint,” he said. “We would like our students to have more experiences overseas. The more of these alliances we can develop, the more likely we are to foster worldwide collaborations.”