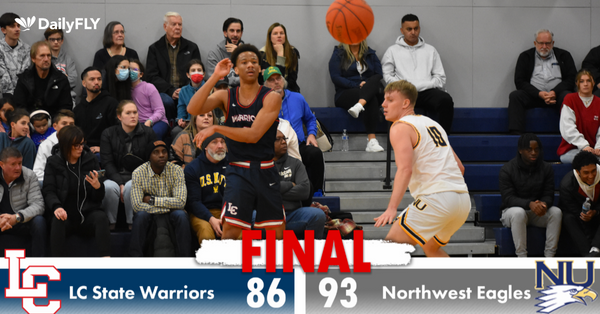 KIRKLAND, Wash. – Davian Brown and Silas Bennion did all they could in a Cascade Conference battle with Northwest University on Friday, but the Warriors fell to the Eagles 93-86. Both Warrior guards scored career-highs in the contest with Brown notching 27 points and Bennion tallying 24.

“Northwest thoroughly dominated the game right away with how they scored it,” Head Coach Austin Johnson said. “We did not have an answer defensively all night. I thought our freshmen had some bright moments, and Silas and Davian scored it but we won’t have a chance to win many games if we don’t shore up some things defensively. It starts tomorrow against an improved Evergreen State team.”

Oreon Courtney, Grayson Hunt and Brown scored early in the contest, but Northwest answered each basket with a 3 to take a 9-6 lead in the first three minutes. Keegan Crosby and John Lustig each found the basket to keep LC within one as the teams continued to trade baskets. Bennion dropped in back-to-back layups to make it a two-point game, 16-14, before a 3 by Brown from deep put the Warriors ahead 17-16 with 14:00 to play in the half.

Buckets by Brown, Hunt and Bennion kept the deficit small with LC trailing 25-23 with 8:57 on the clock. NU stayed hot from 3 with seven triples by 6:25. Brown tallied back-to-back 3-pointers to cut the difference to one, 35-34, at 4:54 but another 3 by the Eagles made it a four-point game once again.

Bennion made his way to the basket twice more, but Northwest held a 47-38 lead at the half.

The Eagles used 3s to regain momentum and push the margin back to 10 points by 9:39. Hunt, Bennion and Brown each fought through traffic to chip away at the NU lead as the clock ticked down. Courtney threw down a dunk and free throws by Brown cut the deficit to four, 78-74, in the final three minutes. Northwest rallied once more to wrap up the contest leading 93-86.

Brown led the Warriors with his career-best 27 points on five 3-pointers. Bennion was not far behind with a career-high 24 points and team-best seven boards, five assists and two steals. Lustig added 13 points, while Courtney and Hunt each scored 10.