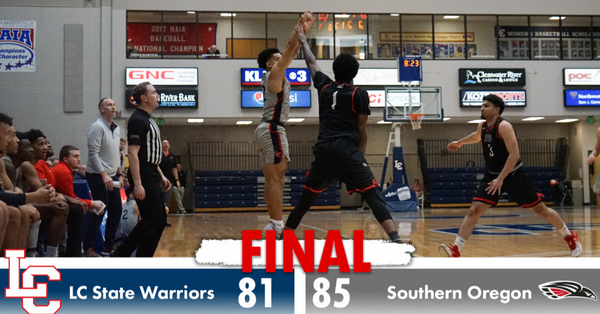 LEWISTON – LC State Men’s Basketball battled with Southern Oregon for all 40 minutes of Saturday’s contest, but were edged 85-81.

The Warriors saw performances from freshmen John Lustig (14 points) and Erick Chaney (17 points), as well as a double-double by Keegan Crosby (14 points, 11 rebounds). Each tallied career-highs in various categories.

“Awesome job of fighting and clawing back into it,” Head Coach Austin Johnson said. “I loved our togetherness, even in the stretches where things were tough. Our freshmen had some bright spots on both sides of the ball. Erick was phenomenal in his minutes and really helped us rally. Despite the loss, this was a weekend of improvement for us. We’ll need to keep at it as things continue in the second half of league play.”

Grayson Hunt tallied the first four LC State points, but SOU jumped out to a 10-4 lead in the first four minutes. Davian Brown sparked a six-point rally with a triple, aided by free throws by Chaney and Anthony Peoples Jr., to tie the game 10-10 by 15:03. A triple by Chaney gave LC its first lead, 13-12, midway through the half.

After a scoring drought of nearly five minutes on both sides, Lustig gave the Warriors a 15-14 edge with layup at 9:06. The back-and-forth continued until Crosby, Lustig and Peoples Jr. combined for seven straight to put LC ahead 24-21. Crosby added two more buckets before the half ended with SOU leading 36-28.

LC State rallied to gain momentum early in the second half. Bennion drained a jumper in the first possession, and Hunt and Lustig tallied a pair to bring the Warriors within four, 38-34, at 18:21. A jumper by Hunt started a run of eight, capped by back-to-back 3s from Crosby and Brown, to give LC a 42-41 advantage by 16:13.

SOU pushed its lead back out to 10 with 13:53 to play, but five points each from Brown and Chaney knotted things up 54-54 midway through the half. A nine-point run by the Raiders fed into a 12-point deficit with the Warriors trailing 74-62 with five minutes left in the half.

Chaney tallied a pair of free throws and back-to-back 3s in the final 35 seconds, and Lustig added a triple, but LC was unable to overcome the deficit and fell 85-81.

The Warriors host Evergreen State and Northwest at home on Jan. 20 and 21.