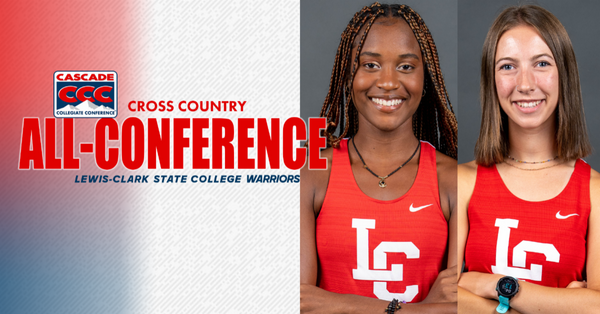 TALENT, Ore. – The No. 21 LC State Women’s Cross Country team highlighted the morning for the Warriors with a third-place finish at the 2022 Cascade Collegiate Conference Cross Country Championships, presented by U.S. Bank. The Warrior women had two runners garner all-conference accolades with Geraldin Correa in fifth and Brooklyn Shell in 13th. The No. 15 men finished fifth overall, led by a 19th-place finish from Griffen Parsells.

“An up and down day for us depending on how you look at it,” Head Coach Mike Collins said.

The LC State women put together a strong race to help maintain an at-large berth into the national meet. The Warriors placed third overall with 83 points with five runners in the top 25.

“The women ran very well,” Collins said. “We have continued to improve at both the front and back end of our pack. Geraldin is really coming into her own and proved pretty critical today for us, along with Brooklyn, both of which earned All-CCC with their efforts. Just as importantly, our next set of runners helped to close the door on our scoring and all ran close together. Very excited for them as they seem to get better every week. Although we also have to wait on final polls and at-large berths, the women should feel good about their chances at returning to nationals for the 22nd straight year.”

Correa and Shell hit the first split tied for 13th and both remained in all-conference contention throughout the race. Correa finished fifth in the field with a time of 19:07.5, and Shell crossed the line 13th (19:37.0). Both earned the first All-Cascade Conference honors in cross country in their careers.

The No. 15 LC State men competed with a talented field, with half the teams in the race ranked in the top 25. The Warriors finished fifth overall with 127 points.

“We had much higher hopes on the men’s side, but we also know that our conference is extremely competitive with five ranked teams and one or two more that maybe could be,” Collins said. “Our guys ran like they have all year with good packing and small gaps. We were just hurt too much by the teams that had good front runners and with a smaller field like this we just could not get enough of the score back before the finish. Right now, not sure how rankings will fall as I know most raters have a hard time believing that there are that many good teams in one conference, so we will see.”