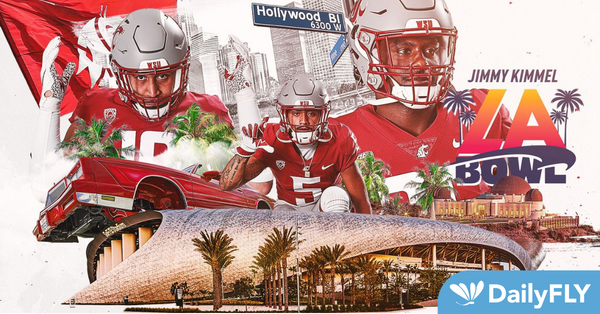 The 2022 Jimmy Kimmel LA Bowl will feature the Cougars against Fresno State, champions of the Mountain West Conference. This will mark the fifth meeting between the two teams, the last coming in 1994, a 24-3 Cougar victory in Pullman.

“Washington State is thrilled to accept an invitation to the 2022 Jimmy Kimmel LA Bowl,” said WSU Director of Athletics Pat Chun. “The opportunity to play in a world-class venue at SoFi Stadium, in a region of the country with so many of our alums and fans, will create a memorable experience for our football team.”

In his first full year as the Cougars head coach, Jake Dickert guided WSU to a 7-5 regular-season record, 4-5 in Pac-12 play. The Cougars swept their nonconference schedule, including a 17-14 win at No. 19 Wisconsin, and have captured three of its last four games to reach the LA Bowl. The selection marks the seventh-straight bowl appearance by the Cougars, a program record.

“We are excited for another opportunity to continue our season at the Jimmy Kimmel LA Bowl, against a very good Fresno State program,” said WSU Head Coach Jake Dickert. “We’re looking forward for the chance to send our seniors out on a winning note and can’t wait to see all the Coug fans out in Los Angeles.”

Tickets for the 2022 Jimmy Kimmel LA Bowl may be ordered through wsucougars.com. Fans may also call the Cougar Ticket Office at 1-800-GO-COUGS starting at 9 a.m., Monday morning. More information is also available at https://www.sofistadium.com/labowl.

The 2022 Jimmy Kimmel LA Bowl will be televised live nationally by ABC at 12:30 p.m. from SoFi Stadium in Los Angeles, Calif.