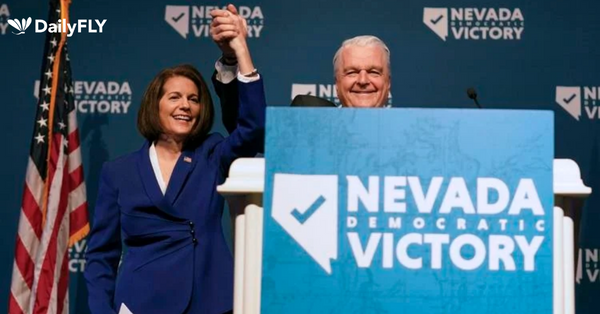 Democrats have 50 seats, with a Senate race in Georgia still to be decided in a Dec. 6 runoff. Should the chamber be 50-50, Vice President Kamala Harris has a tie-breaking vote from the West Wing, as she did during President Joe Biden’s first two years in office.

Cortez Masto defeated Republican Paul Laxalt, earning 48.8% of the votes to 48.1% for the challenger. With 98% of the vote counted, the difference stood at about 6,600 votes.

Rural areas of Nevada continued to be counted, according to published reports; votes counted from the Las Vegas area pushing the lead above 5,000 led The Associated Press to make its call.

Control of the House of Representatives, as of Sunday morning, remained unsettled.

Cortez Masto, a groundbreaker as the first Latina senator, made abortion a key part of her campaign – a thread through many victories by Democrats in the midterm elections. The 58-year-old also courted “Dreamers” wanting citizenship, and has fought for a higher minimum wage. Former President Barack Obama campaigned in the state on her behalf.

Her campaign coffers were between three and four times that of Laxalt. OpenSecrets, which tracks campaign finances, pegged her spending at $47 million with $6 million cash on hand in the middle of October; Laxalt, at the same time, had spent almost $13 million and had $3 million remaining.

Laxalt, like most Republicans bidding for Congress, chose to hit on inflation and economy in his campaigning. Those issues regularly polled as the greatest concerns across the country, including among Nevadans. The 44-year-old was supported at rallies by former President Donald Trump.

From Cambodia and the summit of the Association of Southeast Asian Nations, Biden said, “I feel good. I’m looking forward to the next couple of years.” He also said getting a 51st win in Georgia would be “just simply better. The bigger the number, the better.”

Senate Majority Leader Chuck Schumer, D-N.Y., tweeted late Saturday, “We staunchly defended a woman’s right to choose. Because the American people turned out to elect Democrats in the Senate, there is now a firewall against the threat by MAGA Republicans of a nationwide abortion ban.”

In another tweet, he wrote, “The American people rejected the anti-democratic, authoritarian, nasty, and divisive direction the MAGA Republicans wanted to take our country.”