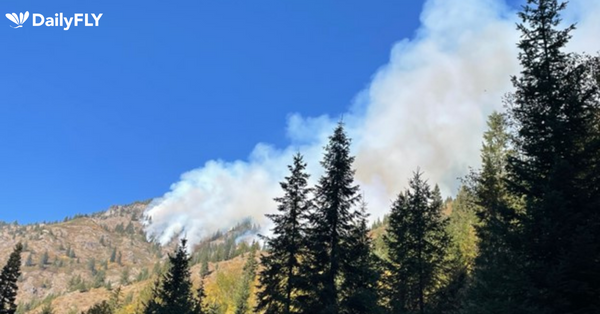 KAMIAH – The Nez Perce-Clearwater National Forests and the Idaho Department of Fish and Game (IDFG)’s Clearwater Region are working together on management projects that improve wildlife habitat on National Forests lands. One such project is East Saddle, where the Forest Service recently implemented prescribed burning to improve the habitat for elk and other wildlife.

The East Saddle Integrated Restoration Project, a collaborative project between the Forest Service and IDFG, is located on the North Fork Ranger District of the Nez Perce-Clearwater National Forests in areas of the Cayuse Creek drainage south of Old Kelly Creek Work Center, extending west of the Work Center and north of Kelly Creek to the North Fork of the Clearwater. The primary purpose of the project is to improve browse for ungulate species, such as elk and deer, while also providing improved elk summer and winter range and calving habitat. Prescribed burning, timber harvest, and aspen restoration are all utilized in the project plan as ways to meet these objectives.

“We’re really pleased with the results,” said TC Peterson, prescribed fire and fuels specialist on the Nez Perce-Clearwater National Forests, of the recent East Saddle prescribed burn. “On average, this burn consumed 80-90% of the targeted fuels within the designated units, which is an excellent success rate.”

Supporting elk populations in this area of the National Forest is a management priority for the Idaho Department of Fish and Game. The Lolo Zone elk herd reached its peak of approximately 16,000 animals in the late 1980s, and the population has been in a long–term decline since. Projects like East Saddle are being collaboratively designed to improve key summer, winter, and transitional habitats that are necessary for elk forage and calving habitats.

“The East Saddle prescribed burn is a great example of how fire can be used as a tool to improve forest conditions and wildlife habitat,” said Tara Ball, Regional Wildlife Biologist with IDFG. “Not only does prescribed fire stimulate new growth that improves forage for elk, it also creates a mosaic of new and old vegetation, providing diverse habitat within the forested system that is important to many wildlife species.”

While smoke is an inevitable by-product of prescribed burning projects, the smoke produced through a planned burn is much less than what would be produced by a wildfire.

“The smoke produced by the October 19 burning at East Saddle lifted approximately 2,000 feet above ground level and drifted east,” recalls Jim Wimer, Fire Information Specialist with the National Forest. “During the afternoon, the winds were light, so the smoke stayed mainly over the Kelly Forks drainage.”

Smoke monitors deployed in the Missoula and Bitterroot Valleys showed no impacts to air quality during these prescribed fire operations. Later that night some smoke briefly drifted across the Continental Divide, but it dissipated quickly, and air quality was unaffected.

If you have questions about wildlife habitat improvement projects on the Nez Perce-Clearwater National Forests, please contact the Idaho Department of Fish and Game (208-799-5010) or the Forest Service (208-451-5585).