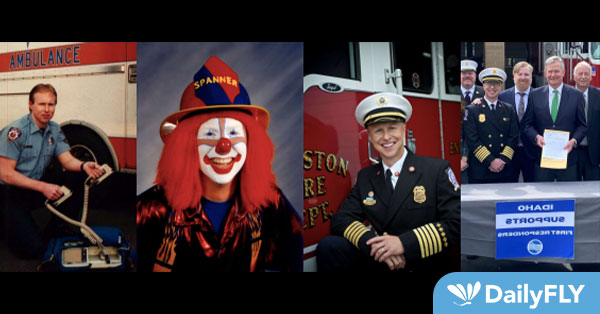 LEWISTON – After 31 years of dedicated service to the Lewiston community and surrounding area, Fire Chief Travis Myklebust has announced his retirement.

“I want to first start off by saying it has been an honor to be an employee of the City
of Lewiston for the past 31 years and to serve in the role of fire chief for the past 8 1⁄2 years,” Chief Myklebust said. “The wonderful people I have had the pleasure to work with and the supportive community members I have served make this a bittersweet decision, but it is time.”

May 31, 2023, will be Chief Myklebust’s last day. He started with the Lewiston Fire
Department as a reserve in 1991 and was hired full-time on October 9, 1993. He
served as a paramedic from 1993-2021. He was the youngest firefighter hired in the
department’s history starting at 18 years of age. He was also the youngest engineer,
captain, battalion chief, division chief, and one of the youngest fire chiefs.

Myklebust started in the fire service with the primary goal to help people. As he was
promoted in rank, his focus became to lead, inspire, and plan to allow the city and fire department to provide the best service to all of those they serve.

“During my career, I have had the opportunity to be a part of many great programs
that have helped advance the department,” Chief Myklebust said. “Some of those
include being a part of the first paramedic class, being on the department’s first state hazmat team, creating the Life Safety Team, and being the first fire clown (“Spanner” pictured on second page) in the department.”

As fire chief, Myklebust made it his goal to work hard and leave the department in a
better place. He explained that looking back he believes he has done just that. Some
highlights of his accomplishments include establishing an efficient and effective
strategic plan for the department; securing over $1,000,000 in state and federal
grants which have helped take the burden to operate the fire department off of the
local property taxpayers; adding multiple positions including the division chief of
training and safety and adding a third firefighter to each shift on Engine 72 which
serves the East Orchards, and recently brought the ambulance billing staff under the
the direction of the fire chief.

The department has also seen huge improvements regarding the overall health and wellness of its employees.

“This is key to my mission that everyone enters the fire department healthy, so in turn, they should leave healthy,” Myklebust said. “When I took over as fire chief, we did not have mutual aid with the City of Clarkston or Clearwater Paper Fire Department, and now not only do we have mutual aid, we have automatic aid for all working structure fires which has greatly improved the safety of our firefighters and citizens,” Myklebust said.

This year, he was also a part of helping pass legislation (pictured below) that will provide future funding to the city and the fire department to improve service levels without adding an additional burden to property taxpayers.

“I just want to thank my family, each one of you, the members of the fire department,
and the citizens of the LC Valley for the opportunity to serve our amazing city,” Chief
Myklebust said. “I will not be letting off the gas these next seven months but more
importantly, will be pressing the gas to the floor and finishing out some very important projects for the fire department.”

Myklebust explained that while his career in the fire department will be over, he is not
leaving the valley. He will be following his passion for teaching and consulting and will be helping shape the future of firefighters and fire chiefs in our region and state.
Travis, thank you for your many years of service to the Lewis-Clark Valley and the
State of Idaho.